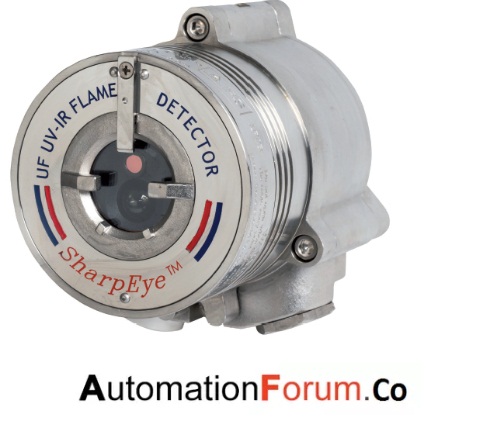 In process plants, sudden release of hydrocarbon / self igniting fluids may develop rapidly into a fire. In such cases it is imperative that fire is detected right at inception. Fire detectors are the devices which effectively carry out this task in this session we are going to discuss about UV type fire detectors

An ultraviolet (UV) radiation detector contains a sensor element (solid state or gas filled tube) that responds to a radiation band with a wavelength of less than 2800 m-10 (Angstrom). The sensor consists of a multiplier detector (usually Geiger Muller type ionization tube) mounted inside a metal housing with a quartz lens.

The amplification and monitoring circuits can be incorporated into the detector head, or located separately in a remote controller.

When ultraviolet radiation falls on the lens, the tube becomes conductive and activates the alarm control circuits. The effect of transient signals, such as lightning, can be eliminated by an integrated circuit.

UV radiation is strongly absorbed by smoke and, to some extent, by various vapors. UV detectors are highly susceptible to optical obstruction of the lens (eg, dirt, salt, oil mist).

The most commonly used UV detector has a lens control device (manually or automatically activated), which produces a fault signal when a certain threshold of darkening is reached. The sensitivity of the detector at this point is, however, unacceptably reduced for many fire protection applications

The typical UV detector is as shown is Fig.

Ultraviolet light type detectors are also extremely fast in detecting fire but they should not be applied in dusty environments or in an environment with airborne oil droplets or where fires are expected to produce heavy smoke which may foul the lens. UV detectors are normally used, for example, for fire detection under the hood of gas turbines.

1) UV detectors are subject to interference from welding activities, X-rays used in non-destructive testing and lightning.

2) These detectors have an upper ambient temperature limit of 150 °C.

Area of Detection : Cone of sight

What are the different types of fire detectors?

1. Not affected by sunlight, or adverse weather

2. Detectors can be self testing

1. Spurious trips due to lightning, X-rays, welding and flares.

Do you want to know about Working of Infrared Gas detector

What are Radiation Pyrometers ?