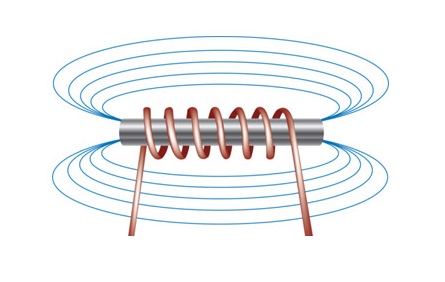 Magnetism and electricity were considered to be two separate phenomena for a long time. However in 1820, the Danish physicist Hans Christian Oerested ( 1777 – 1851) made an important discovery that established a relation between electricity and magnetism.An electromagnet is a type of magnet in which the magnetic field is produced by an electric current.

Manual method is used to prepare magnets of small strength only like compass needle. To prepare strong magnets, electrical method is to be used. If a coil of insulated copper wire be wrapped round on a cylinder of card board
( forms a solenoid ) the bar to be magnetised inserted in the cylinder and a strong electric current passes through the coil, the bar will be found to be magnetised. or Electro magnets are made by winding the coils of insulated copper wire over a soft iron or steel pieces. The core becomes a powerful magnet as long as current is passing

Electro magnets are widely used in Industries and also in many situations in dialy life. They are used in cranes to lift heavy loads of scrap iron and iron sheets.

2) The fact that certain materials get struck, to magnets is used to make i) magnetic door closers ex. in refrigerators in which a weak magnetic strip all round the door ensures that the door remains firmly shut 2) Magnetic latches or
catches, used in windows , cupboard doors 3) magnetic strickers 4) magnetic clasps in handbags 5) magnetic pin, paper, clip holders and so on.

3) Electromagnets are used to separate magnetic substances, like iron nickel and cobalt, from non – magnetic substance, like copper. Zinc, brass, Plastic and paper. They are also used to remove ‘foreign bodies’like iron fillings from the eyes of a patient. They are used in all electrical machines, transformers, electric bells, telegraphs, telephones, speakers, audio and video tape recorders and players, relays etc.

4. Data( in computer hard disks, floppies and tapes) and audio visual signals ( video tapes) can be stored by coating special surfaces with magnetic material. In all these, the particles of the magnetic coating get alligned in a particular way by a magnetic field produced by a recording head, much the same way as domains get alligned in the presence of magnetic field. The differently alligned particles then represent data, sound or audio visual signals. The same principle is used to store information in the magnetic stripes found on credit cards, ATM cards, some air line and train tickets, telephone cards etc.

Comparison Between Electromagnet and Permanent Magnet :