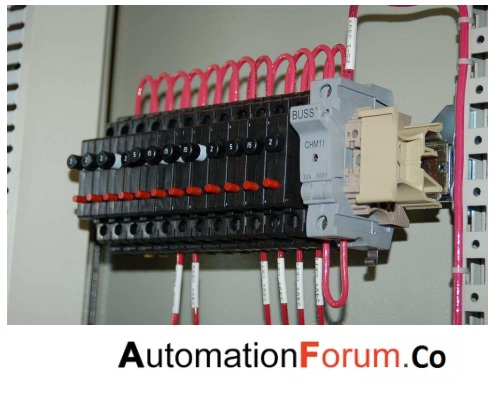 There is much to be said for neatness of assembly in electrical signal wiring. Even though the electrons don’t “care” how neatly the wires are laid in place, human beings who must maintain the system certainly do. Not only are neat installations easier to navigate and troubleshoot, but they tend to inspire a similar standard of neatness when alterations are made,in this session we are gonna discuss about electrical signal and control wiring

The following photographs illustrate excellent wiring practice. Study them carefully, and strive to emulate the same level of professionalism in your own work. Here we see 120 volt AC power distribution wiring. Note how the hoop-shaped “jumper” wires are all cut to (nearly) the same length, and how each of the wire labels is oriented such that the printing is easy to read:

This next photograph shows a great way to terminate multi-conductor signal cable to terminal blocks. Each of the pairs was twisted together using a hand drill set to very slow speed. Note how the end of the cable is wrapped in a short section of heat-shrink tubing for a neat appearance:

Beyond esthetic preferences for instrument signal wiring are several practices based on sound electrical theory. The following subsections describe and explain these wiring practices.

Many different techniques exist for connecting electrical conductors together: twisting, soldering, crimping (using compression connectors), and clamping (either by the tension of a spring or under the compression of a screw) are popular examples. Most industrial field wiring connections utilize a combination of compression-style crimp “lugs” (often referred to as ferrules or compression terminals) and screw clamps to attach wires to instruments and to other wires.

If you look closely at this photograph, you can see the bases of crimp-style ferrules at the ends of the wires, just where they insert into the terminal block modules. These terminal blocks use screws to apply force which holds the wires in close electrical contact with a metal bar inside each block, but metal ferrules have been crimped on the end of each wire to provide a more rugged tip for the terminal block screw to hold to. A close-up view shows what one of these ferrules looks like on the end of a wire

A close-up photograph of a single terminal block section shows how the screw-clamp system works. Into the right-hand side of this block a single wire (tipped with a straight compression ferrule) is clamped securely. No wire is inserted into the left-hand side:

If another wire were secured by the screw clamp on the left-hand side of this terminal block, it would be made electrically common with the wire on the right-hand side by virtue of the metal bar joining both sides.

Other modular terminal blocks include such features as LED indicator lamps, switches, fuses, and even resettable circuit breakers in their narrow width, allowing the placement of actual circuit components near connection points. The following photograph shows a swing-open fused terminal block module, in the open position:

Modular terminal blocks are useful for making connections with solid core cables and braided metal cables. The clamping force applied to the tip of the wire by the screw mechanism inside one of these blocks is direct, without slipping or other movements involved. Some terminal blocks, however, have a less sophisticated design. The following picture shows a pair of “isothermal” terminals designed to connect the thermocouple wires. Here you can see how the bare tip of the screw applies pressure to the wire inserted in the block

Many field instruments, however, do not possess “block” style connection points at all. Instead, they are equipped with pan-head machine screws designed to compress the wire tips directly between the heads of the screws and a metal plate below. Solid wires may be adequately joined to such a screw-head connection point by partially wrapping the bare wire end around the screw’s circumference and tightening the head on top of the wire, as is the case with the two short wire stubs terminated on this instrument:

The problem with direct compression of a wire tip under the head of a screw is that the tip is subject to compression and shear forces. As a result, the tip of the cable tends to mutilate with repeated connections. In addition, the tension in the cable will tend to turn the screw, which will potentially relax it over time. This finishing technique is totally unsuitable for braided cables, because the shearing forces caused by the rotation of the screw head tend to “fray” the individual threads. The best way to connect a braided cable tip directly to a screw type connection point is to first crimp a compression style terminal on the cable. The flat “terminal” metal portion (splint) of the terminal is inserted below the head of the screw, where it can easily tolerate the shear and compression forces exerted
by the head

This next photograph shows five such stranded-copper wires connected to screw-style connection points on a field instrument using compression-style terminals:

Compression-style terminals come in two basic varieties: fork and ring. An illustration of each type is shown here

The fork terminals are easier to install and remove, since they simply require loosening the connector screw instead of removing the screw. The ring terminals are safer, since they can not “fall” from the connection point if the screw is accidentally loosened. In the same way that the direct termination under the head of a screw is totally unsuitable for braided cables, the compression-type terminals are totally unsuitable for solid cables. Although the initial crimp can be feltSecure compression terminals lose tension quickly on a solid cable, especially when there is a movement or vibration that accentuates the connection. Compression cable terminals should only be crimped on the braided cable!

The correct installation of a compression type terminal on a cable end requires the use of a special crimping tool. The following photograph shows one of these tools in use:

What are Motor Control Centers (MCC)? Types of MCCs