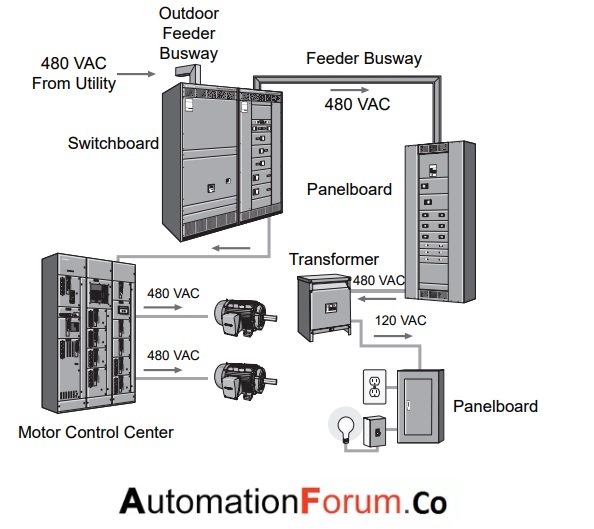 The energy distribution systems used in large commercial and industrial applications can be complex. Power can be
distributed through switchgear, electrical panels, transformers and boards. Energy distributed through a commercial or industrial application is used for a variety of applications such as heating, cooling, lighting and motor-driven machinery. Unlike other types of power distribution equipment, which are used with a variety of load types, motor control centers primarily control the distribution of power to electric motors.

Wherever engines are used, they must be controlled. In Basic Concepts of Control Components, you learned how various control products are used to control the operation of motors. For example, the most basic type of AC motor control involves turning the motor on and off. This is often achieved by using a starter motor consisting of a contactor and an overload relay. The contactor contacts are closed to start the motor and open to stop the motor. This is done electromechanically and often requires the use of on / off buttons and other connected devices to control the contactor.

Typically one motor starter controls one motor. When only a few geographically dispersed AC motors are used, the circuit protection and control components may be in an enclosure mounted close to the motor.

In many commercial and industrial applications, quite a few electric motors are required and, often, it is desirable that all the motors are controlled or all from a central location. The apparatus designed for this function is the motor control center (MCC). The motor control centers are simply physical groups of combination starters in a set. A combined starter is a single enclosure that contains the motor starter, fuses or circuit breaker, and a device to disconnect the power. Other devices associated with the engine, such as push buttons and indicator lights, may also be included.