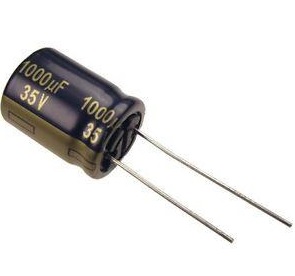 Explanation: Larger plate area results in more field flux (charge collected on the plates) for a given field force (voltage across the plates).

An approximation of capacitance for any pair of separated conductors can be found with this formula:

A capacitor can be made variable rather than fixed in value by varying any of the physical factors determining capacitance. One relatively easy factor to vary in capacitor construction is that of plate area, or more properly, the amount of plate overlap.

The following photograph shows an example of a variable capacitor using a set of interleaved metal plates and an air gap as the dielectric material:

As the shaft is rotated, the degree to which the sets of plates overlap each other will vary, changing the effective area of the plates between which a concentrated electric field can be established.

Difference between primary and secondary cell