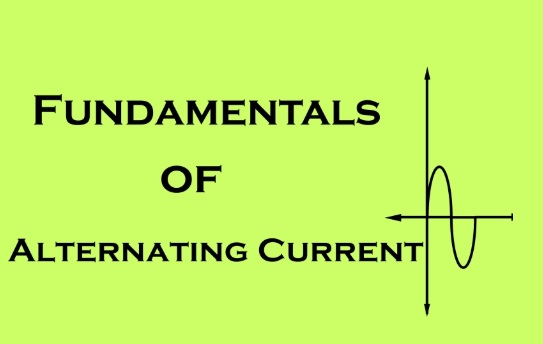 We have dealt so far with cases in which the currents are steady and is in one direction; this is called direct current ( d.c.) the use of direct currents is limited to a few applications. e.g. charging of batteries, electroplating, electric
traction etc. For large scale power distribution there are however many advantages in using alternating current (a.c.) In an a.c. system, the voltage acting in the circuit changes polarity at regular intervals of time and the resulting current (called alternating current) changes direction accordingly. The ALTERNATING CURRENTS system has offered so many advantages that at present electrical energy is universally generated, transmitted and used in the form of alternating current. Even when d.c. energy is necessary, it is common practice to convert A.C. into D.C. by means of rotary converters or rectifiers

Alternating voltage may be produced by rotating a coil in a magnetic field as shown in figure.

The Value of the voltage produced depends upon the number of turns of the coil, strength of the field and the speed at which the coil rotates. The emf induced depends upon the Faraday laws of electro magnetic Induction. which
state that whenever a conductors cuts across a magnetic lines of force or flux an emf is induced in it. Also the magnitude of the induced emf is directly proportional to the rate of change of flux linkages.

The shape or curve obtained by plotting the instantaneous values of voltage or current is called its wave forms. The different wave forms are as shown in the fig

The time taken by the wave to complete a cycle is called periodic Time it is denotted by ‘T’ If 50 cycle are obtained in one second then the time period or periodic time for one cycle is 1/ 50 second or 0.02 seconds.

The number of cycles per second is called frequency or periodicity.
Time in seconds

The unit of frequency is hertz and the symbol used is Hz. It is reciprocal of the time period

This is also called crest value, peak value or amplitude. It is the highest value attained by the current or voltage in a half cycle

Form factor of an A.C. is the ratio between R.M.S. value and mean value or Average value.

It is the ratio of maximum, value to R.M.S. Value

The angular displacement between two or more alternating quantities is known as phase or The meaning of phase is to indicate the relative position between voltage and current components. The components may rise or fall at the same time may lag the other or lead.

Difference between AC and DC Motors

Advantages of A.C. over D.C.

Basics of Electric Motors for Beginners