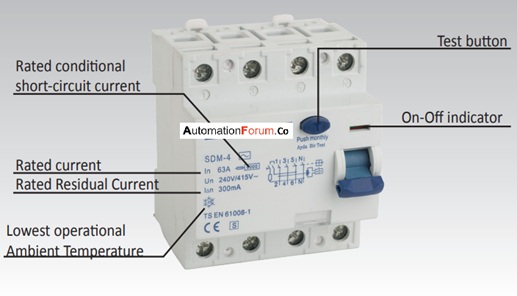 The RCCB is the proper device to detect and trip against electrical leakage currents. This device is used to protect the equipment and people from low-level ground faults. This device uses the residual current sensing method to detect ground faults. The RCCB will operate if there is a difference in current between any two phases, the differential current is called residual current. If this device detects any faults then it would prevent the accidents by disconnecting the main circuits. The operation of this device is based on Kirchhoff’s current law, it states that the incoming current in a circuit will be equal to the outgoing current from that circuit. Mostly the RCCB is generally used in series with an MCB. The phase and neutral wires are connected through an RCCB, and these devices are widely used for protection from leakage current of 30, 100, & 300ma.

When will RCCB trip

A Residual current circuit breaker can provide protection against electrocution or electric fires and it does this by cutting off the current flow automatically when it senses a leakage current from a circuit.

What are the types of residual current circuit breakers?

What are the characteristics of RCCB?

What is the difference between ELCB and RCCB?

What are the advantages of RCCB?

What are the disadvantages of RCCB?

What is the specification of RCCB?

The RCCB has the following specification

What is a signal isolator and what does it do?

What is an instrument transformer?

What are Motor Control Centers (MCC)? Types of MCCs