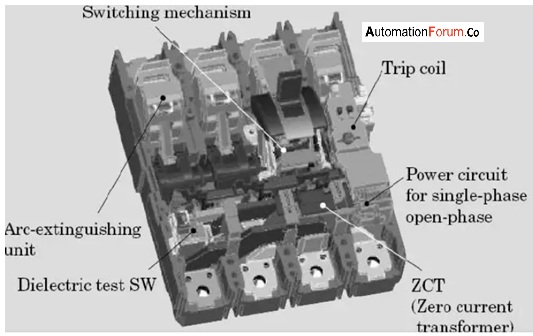 ELCB stands for earth leakage circuit breaker, it is a protective device which would suddenly switch the electricity off in case of any leakage of electricity. This device can protect the people from electric shock, ELCB is also called as RCD or safety switches. By using an ELCB we can prevent electrical shocks, chances of fire, etc. This device is mostly used in places that have high earth impedance. ELCB is capable to detect the slight amount of current which is in a faulty metal electrical equipment. If any current flows to the ground wire it is because of electrical faults and the supply of current to that appliance must be stopped so ELCB’s are used to protect the person who is in contact with the electrical device.

So basically ELCB is an electrical device that would cut off the power to the electrical appliance in case of any imbalance in the flow of electrical current between the phase and neutral conductor.

How does an ELCB operate

If the current-carrying wire accidentally touches the metallic body of the connected device or the appliance a potential is created between the earthed rod and the metallic enclosure of the device. So the ELCB will sense the difference in potential and if the potential difference reaches a certain level which could be harmful to the human body, then the ELCB will cut off the power supply from the connected device and so this way the human safety can be ensured.

How ELCB is connected

All the electrical or electronic devices must be earthed while installing, by doing so we are preventing electrocution. A metallic rod will be buried in the soil and the ELCB is connected between the wire coming from the rod and to the wire attached to the external metallic body of the electrical device. It can also be described as the ELCB is connected to the earth wire read.

What are the types of ELCB

This type of ELCB is also called RCD, in this, both the supply and return conductors are run through a sensing coil. So in case of any current imbalance then the magnetic field won’t cancel equally and thus the ELCB would detect the imbalance and disconnects the device from the power supply.

What are the advantages of ELCB

What are the disadvantages of ELCB

How to read an electrical diagram

What are dosing pumps and what type of pump is it