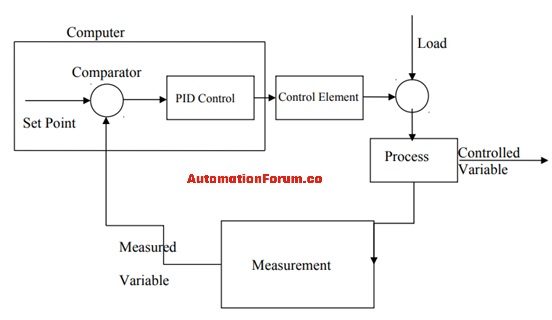 What are the functions of a computer aided process control?

How computer process controls are classified?

What is the difference between analog and digital controller?

These controllers will be in the control room and it would do the distributed control and monitoring. The cabling cost of the analog controller will be high. The control loop coordination will be difficult and also the implementation of the control algorithms rather than the PID is really difficult. The central monitoring panels will be big due to the large number of controllers.

The digital components are less affected by the variation of the environment and they would long last too. These components are reliable and they won’t be hardly affected by the noise, disturbances, and also parameter variations. The digital processors are small in size and would only use small space. These processors are suitable for different control applications. Direct digital control and distributed control system are both an example of the digital control system.

What are the types of computer process control?

This is the measured value of the input parameters and also the output variables which represent the process performance.

This is the data that shows the equipment status while it is in the process and how it does the process.

This will the production data of a manufacturing plant

A DDC can be described as a computer process control system and in this system, there are certain components that are conventional and this conventional component is replaced by a digital controller. The process regulation is carried out by a digital computer according to the time. The direct digital control is known as a loop control too, because the digital computer can do the functions of a comparator, controller, and they can also do certain safeguarding operations. The DDC control has the ability to handle the multivariable processes and they can do this with the interaction between elements. This type of computer control would have a software program and it would define all the control functions, setpoint, and also the deviation about the nominal. The major drawback of direct digital control is that it only uses one processor to do the process, because of this a single error could disturb a large number of controlled variables and also it could stop the process.

In a distributed control system there are many computers and the total work will be divided into all these computers. A DCS is composed of many process control stations and these stations can be seen all around the plant so that the individual loop and also the devices of the process can be controlled. There will be a central control room and it would have operator stations where the supervisory control of the plant takes place. The DCS can be seen in the entire plant due to the local operator stations which are distributed all over the plant. The interaction of the process is done with the help of communication networks. Due to the usage of multiple microcomputers, the workload of the process control is distributed.

We can install DCS in high basic configuration for the required applications, due to the multiple computers parallel multitasking is possible. The control cabling is very low and because of the networking, the process data can be transferred throughout the plant.

Numerical control is another form of industrial computer control, in this type of control where a machine tool will be directed through a sequence of processing steps. There will be a program of instructions that specifies the step details and sequence. This type of computer control would position the tool which is being used in a process so that the process can be improved.

This type of computer control is mostly used to do the discrete control, it is simple and continuous control. The response time is very quick and it can do the emergency shut-down. This is a microprocessor-based control and it can store instructions in a programmable memory and it can do logic, sequencing, timing, counting, and arithmetic control functions in a process, or in a machine. A PLC can do continuous and discrete process control in the process industries and also in the discrete product industries too.

This is a type of computer control in which it would direct and coordinates many interaction processes in a manufacturing system. It optimizes the plant operations by increasing the plant yield, production rates and also by reducing the consumption of energy. It would also review the operation conditions, in this control system the controller will communicate with the central computer. This type of control system would do the data acquisition, display and analysis with the help of a controller. The setting of the controller can be changed from the computer. The computer would do the supervisory work as the local controller would do the controlling functions. This type of control system can make the operating conditions proper for the process. It would also distribute the limited resources among the parallel process. With the help of a supervisory control system, the operator can determine the plant condition remotely.

What are the advantages of computer process control?

What is continuous process control and what are its types?

What is controller tuning