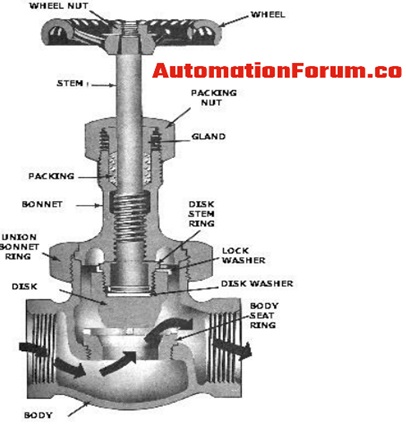 The emergency stop valve is a shut-off valve that would cut of the process media or hazardous fluid while detecting a dangerous event. The emergency stop valves are quick closing valves and this valve is used between a turbine and a steam generator. The stop valves are capable to interrupt the flow of the steam from the steam generator to the turbine. These valves are useful in case of malfunctions, so the stop valve would quickly shut the steam supply when needed. The stop valves are installed in the inlet piping to the steam turbine or onto the turbine shell. These valves are designed in a way that they can prevent the leak, otherwise, any leakage from the valve would affect the process for which it is used for. An example of this will be if there is a leak from the stop valve while it is connected between the steam network and turbine, and if there is a leakage from the valve and this could cause the turbine to turn at a low speed.

What is the purpose of an emergency stop valve?

The major purpose of an emergency stop valve is to act as a proper shutdown organ in the live steam line between the generator and the turbine. So if there is any disturbance then it will cut off the supply of the steam to the turbine really quick. The emergency stop valve consists of a testing arrangement and this would allow the checking of the valve spindle and piston rod for free movement without interfering with the turbine operation.

What are the parts of an ESV and how does an ESV operates?

The emergency stop valve is a single-seat valve and it has a movable closing component that is developed as a plug or disc, is mounted in the housing. This would prevent the medium applied to the inlet from exiting. The intermediate positions would lead to throttling or control and thus the flow will be affected. We can operate the plug with the help of actuators manually. The operation of the ESV is required when there is a problem or in case of an emergency. If the hot steam comes in touch with a large amount of condensate then evaporation could happen and there would be a change in volume and this would cause the water hammer and there would be a high-pressure surge which is very higher than the operating pressure. There is also another situation that could create surge pressure and it would be the evaporation of the hot condensate.

So in all these situations, an ESV must operate, the plug or disc which acts as the closing element in the stop valve stops the medium applied to the inlet from getting into the outlet and it is done by pressuring the seat. The plug/seat must also do another important purpose which is to act as a good seal during throttling.

How to do the testing of an emergency stop valve?

We must check the emergency stop valve regarding the tightness against the process media or steam. These valves must be checked for correct operation at regular intervals and there would be a test valve for this.

The major test can be done while the servo and the valve are disassembled once a year the test will be automatically performed by the turbine controller. The turbine rotor speed will be supervised for five minutes while the ESV is closed and one control valve is open.

Condition for the test

While testing, the turbine must be on turning gear and the ESV should be above 35 percent of the rated pressure. The turbine trip must be reset and all ESV and CV shall be in the closed position and if there is a shut-off valve installed in the exhaust pipe then this valve must be in the open position.

If the above mentioned conditions are not done then “test blocked” will be indicated.

What are the applications of emergency stop valves?

What is a bellow seal valve?

How to select a control valve Actuator ?