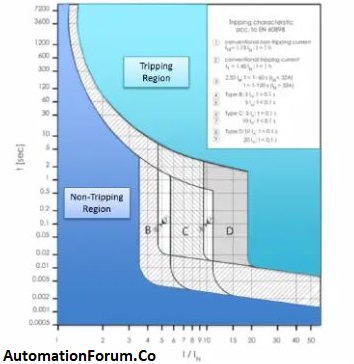 The characteristic curve indicates the correlation between the current and the tripping time.

The classification of Type B, C, or D is based on the breakdown current rating at which electromagnetic operation occurs to give short-term protection against short circuits. The trip curve is a graph defined between the outgoing current and the tripping time (amp-sec Curve) to provide proper equipment protection and performance and avoiding unwanted tripping.

3 to 5 times in the magnetic trip for use in household operations when maximum sensitivity is required and there is little equipment that requires significant start up current. When loads are resistive and there is no in-rush current, B curve MCBs should be used.

For commercial and industrial applications, Type C devices are the standard. These devices are designed to trip when the current is 5-10 times the rated current i.e., 50-100A for a 10A electrical device. When loads have a negligible amount of in-rush current on initiation, C curve MCBs should be used. Small transformer load is the ideal application.

Type D devices are intended to trip 10-20 times per second i.e., 100-200A / 20A electrical device. Normal connection ratings refer to the amount of time a cable can be used continuously under certain installation conditions. Of course, cables can high currents for a limited time without damage.

The K curve MCB is designed for motor applications where ampere rises quickly and rapidly during “start-up.” Curves can go through the transitory inrush of current and minimise nuisance tripping while providing circuit protection. In less than 0.01 seconds, the magnetic element of the K curve interrupts a short circuit at 10 times of the rated current. At 10 times the rated current, the K curve tripping bandwidth will vary from 0.01 second.

1.What is ideal trip curve?

The ideal curve is the desired curve for the bimetallic strip because of its nature and since the exact tripping point cannot be pointed out in the ideal MCB.

2. Which MCB curve is ideal for use at houses?

Circuits with equipment that does not create surge current, such as lighting and distribution circuits are protected by ‘B’ Curve MCBs. They are the appropriate choice for home applications and household appliances that mostly use resistive load.

Since Z curve MCBs are highly sensitive, they will trip when the current exceeds the rated load by two to three times. They’re employed on more delicate instruments that are sensitive to short circuits.

4.What is in-rush current?

5.Does the MCB trip when the voltage is high?

Overvoltage can cause the MCB to trip. When the system voltage is higher, the load provided by the MCB demands more current, which may be greater than the MCB’s rating. The MCB’s built-in protection is current operated, and it will trip if it detects a current greater than its rating.

What is Auxiliary Contact and how it works with MCB?

Difference between primary and secondary cell

Difference between Neutral, Earth and Ground