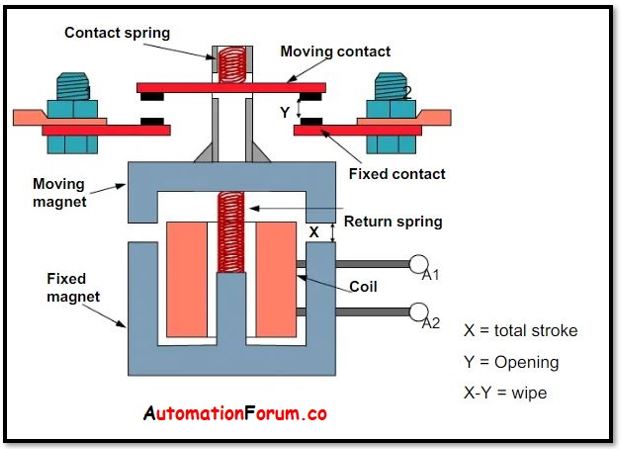 What is a Contactor?

A contactor is an electromagnetic switch that is used to turn on and off an electrical circuit. It’s also a device that can be controlled from a distance. It should be able to make, carry, and break currents in normal and operational overload circumstances. It’s closest to the load centre. It is regarded as a unique sort of relay.

The main difference between a contactor and a relay is that:

Contactors are small and easy to install in the field. These electrical devices usually have many contacts. When the contactor coil is powered, these contacts are generally open and deliver operating power to the load. For the most part, contactors are used to regulate electric motors.

High-current loads are the most typical use for contactors. Contactors are notable for their capacity to handle currents in excess of 5000 amperes and high power in excess of 100 kW. When a large motor current is interrupted, arcs form. A contactor can help to manage and decrease these arcs.

can all be switched using this method.

Construction of a Contactor:

A contactor is made up of three subsystems

In a contactor, the coil provides the driving force that closes the contacts. It resembles an electromagnet because it has a coil twisted around an electromagnetic core. The coil is made up of two parts:

A spring return mechanism is created using this arrangement.

The contactor coil’s input can be either AC or DC. This current comes from the contactor’s external control circuit and is used to stimulate the electromagnetic core.

Contactors have an enclosure similar to those used in other applications, which provides insulation and protection against personnel touching the contacts.

are used to construct the protective enclosure. In most cases, an extra enclosure is added to the open-frame contactor to protect it from severe weather, explosion threats, dust, and oil.

Another key component of this electrical device is the contacts. The contacts are in charge of the contactor’s current carrying task. In a contactor, there are three sorts of contacts:

High welding resistance and consistent arc resistance are required for forming connections. Erosion and mechanical stress should not be a problem for the material. Silver tin oxide is used in high current and DC applications, while silver nickel and silver cadmium oxide are used in low current applications.

Operation of the Contactor:

The coil’s excitation power can be AC, DC (available in a variety of voltage ranges from 12VAC/ 12VDC to 690VAC), or even universal. Universal coils are those that can work with both AC and DC voltages. During switching operations, the coil draws a modest quantity of electricity. Economiser circuits are used to lower the contactor’s power consumption when it is in operation. Shade coils are used in contactors with AC coils. They might buzz if the alternating current does not cross zero. Shading coils prevent chattering by delaying demagnetization of the magnetic core. DC coils do not require shading because the flux produced is constant.

There are three different types of Contactors, they are:

It was almost certainly the first contactor used to regulate (start or stop) electric motors. The switch was made out of a metal strip that dropped into a contact. This switch had a lever that could be used to pull the switch down or up. The knife blade switch had to be levelled into the closed position by standing next to it back then.

There was, however, an issue with this way of switching. Because it was impossible to manually open and close the switch quickly enough to avoid arcing, this method caused the contacts to wear out quickly.

As a result, the soft copper switches began to corrode, making them more susceptible to moisture and filth. The size of the motors grew greater throughout time, necessitating the use of larger currents to operate them. As a result, operating such high current carrying switches could be dangerous, posing a severe safety hazard. Despite a number of technical advances, the knife blade switch was never fully developed due to the challenges and risks of dangerous operation as well as the contacts’ short life.

The following are some of the features of a manual controller:

The manual controller’s switch or button is physically attached to the controller and cannot be controlled remotely.

When an operator activates the manual controller, the power circuit is activated. It carries the electricity to the load once it is turned on. Manual contactors quickly replaced knife blade switches, and several varieties of these types of contactors are still used today.

The magnetic contactor is operated electromechanically and does not require human interaction. This is one of the most advanced contactors designs available, and it can be controlled remotely. As a result, it helps to reduce the dangers associated with manually operating it and placing operational people in danger. The magnetic contactor only needs a minimal amount of control current to open or close the circuit. In industrial control applications, this is the most frequent type of contactor.

The following are some of the benefits of using a contactor:

The following are some of the disadvantages of using a contactor:

Large lighting installations, such as an office building or a retail store, are frequently controlled by contactors. Latching contactors, which contain two functioning coils, are used to reduce power consumption in the contactor coils. The power circuit contacts are initially closed by one coil, which is then mechanically maintained closed by the second coil, which is simultaneously powered.

A magnetic starter is a device that supplies electricity to electric motors. It features a contactor as a key component, as well as power-cut off, under-voltage, and overload protection.

Contactors, thermal overload relays, and motor protection circuit breakers are all utilised in motor starters, whether they are Direct-on-line or Star Delta. It can even be found in our homes, in the pump starters.

How to read an electrical diagram

What is difference between 3-point & 4-point Starter?