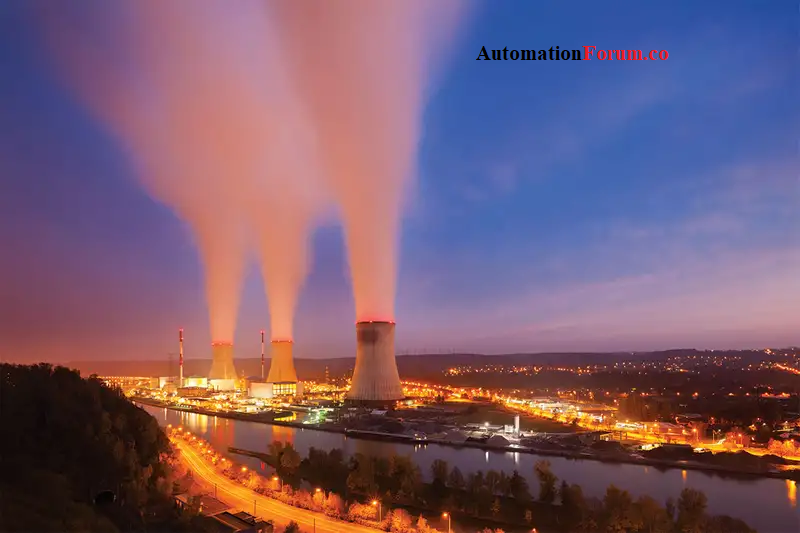 What is a Power plant?

A power plant or power generating station is essentially an industrial site used to generate and distribute mass-scale electricity, usually in the order of several 1000 Watts.

Power station also efficiently transmits generated power over the whole distance. And that’s why the transformer switchyard also becomes an integral part of the power plant to regulate transmission voltage.

Depending on the type of fuel used, a power plant can be of several types. Since only thermal, nuclear and hydropower is handy for the purpose of generating bulk electricity, a power generating station can, therefore, be broadly classified in the 3 above – mentioned types.

To drive the steam turbine, it uses coal as the primary fuel to boil the water available to overheated steam. The steam turbine is then mechanically coupled to an alternator rotor whose rotation leads to electrical power generation.

Bituminous coal or brown coal is generally used in India as a boiler fuel with volatile content ranging from 8% to 33% and ash content from 5% to 16%. The coal is used in the boiler in its pulverized form to improve the plant’s thermal efficiency.

Nuclear generating stations are in more ways than one similar to thermal stations. As always, the exception is that, instead of coal, radioactive elements such as uranium and thorium are used as the primary fuel.

The furnace and the boiler are also replaced by the nuclear reactor and the heat exchanger tubes at a nuclear station.

For the process of nuclear power generation, the radioactive fuels are made to undergo fission reaction within the nuclear reactors.

The fission reaction propagates like a controlled chain reaction and is accompanied by an unprecedented amount of energy produced, which is manifested in the form of heat. This heat is then transferred to the water present in the heat exchanger tubes. As a result, superheated steam at very high temperature is produced.

The energy of the falling water is used in hydroelectric plants to drive the turbine which, in turn, runs the generator to generate electricity. Rain falling on the surface of the earth has potential energy relative to the oceans it flows toward. This energy is transformed into shaft work where the water falls through a significant vertical distance.

Compared to their thermal or nuclear counterpart, hydroelectric plants have much lower capacity. For this reason, hydro plants are generally used to serve the load during peak hours in scheduling with thermal stations.

What are hydronic boilers or Hot water boilers?