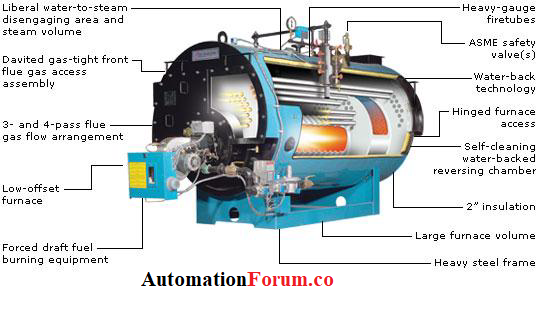 There are different types of boilers classified based on their boiling process. These are three of boilers listed below:

In a fire tube boiler, hot gas passes through the pipes and boiler feed water is inside the shell to be converted into steam. Fire tube boilers are usually used for relatively small steam capacities with low to moderate steam pressures.

As a guideline, competitive fire tube boilers for steam speeds up to 12,000 kg / hour with pressures up to 18 kg / cm2. Fire tube boilers can use fuel oil, gas or solid fuel in their operations.

The ignition process occurs in the pipe, then the heat generated is delivered directly into the boiler containing water. The size and construction of the boiler affect the capacity and pressure produced by the boiler.

What are burners used in boilers? types of burners

In the water tube boiler, boiler feed water flows through the pipes into the drum. The circulated water is heated by the combustion gas to form steam in the steam area in the drum.

The ignition process occurs outside the pipe. The heat produced is used to heat a pipe containing water. The feed water was previously conditioned first through an economizer.

The resulting steam is then collected first in a steam drum until it is appropriate. After going through the secondary superheater and primary superheater stages, steam is released into the main distribution pipe.

It is called a boiler combination because it is available as a complete package. When sent to the factory, it only requires steam pipes, water pipes, fuel supply and electricity connections to operate. Boiler packages are usually and tube types with fire tube designs with both heat transfer and high convection