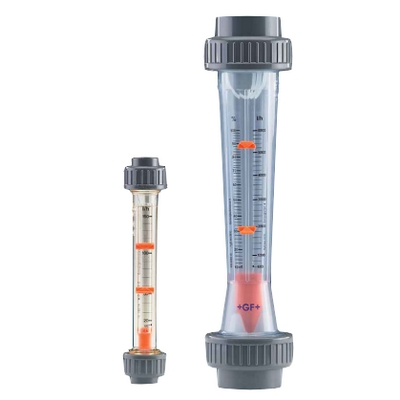 Rotameter is a variable area flow meter, works for measuring the flow of low viscous fluid at high velocity. A variable-area flowmeter is one where the fluid must pass through a restriction whose area increases with flow rate.

It works on the principle of upthrust force exerted by fluid and exerted by gravity. The flow stream displaces a float placed in the stream. The rate of flow is related to the area produced by forcing the float up or down and varying the area.

Working and Construction of Rotameter:

The rotameter consists of a tapered measuring tube and a float. This arrangement produces a resistance value (coefficient of resistance) for the float, which depends on its position in the measuring tube.

The float is placed inside the tapered tube. The transparent glass tapered tube is marked with a scale which will represent the measure of the flow. The float is constructed of various metals which can float on fluids. The selection of floats is made by considering the fluid density.

As the fluid enters the tapered tube, some fluids directly hit the bottom of the float. At this movement, there are two forces exerting on the float, gravity to downwards and trust of the fluid to upwards. Because of the upthrust, the float raises upward, until the upthrust and gravity force equal at a point. A balance is achieved between the force of the flow stream and the weight of the float. The float positions itself vertically within the measuring tube such that the resistance value is balanced. The vertical position will be pointed to the scale, the distance moved by the float will be the function of flow.

Also, a number of various floats are available. The rotating float is used for direct control. Another type that is available is unaffected by viscosity, and a modification of this is available that magnifies the sensitivity of the operating range by 30%, but is more sensitive to viscosity.

What is an open channel flow measurement?

What is a flow sensor and what are the different types of flow sensors?

What is Cavitation and Flashing?