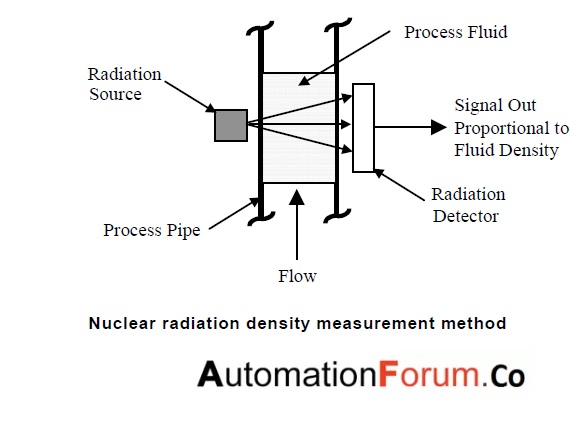 They operate on the principle that the absorption of gamma radiation increases with the density of the material being measured.

In the figure, a representative element for measuring the density of the radiation type is represented. It consists of a source of constant gamma radiation (which can be radio, cesium or cobalt), which is mounted on a wall of the pipe, and a radiation detector, which is mounted on the opposite side. The gamma rays are emitted from the source, through the pipe and the detector. The materials that flow through the pipe and between the source and the detector absorb radioactive energy in proportion to their densities. The radiation detector measures the radioactive energy that is not absorbed by the process material. The quantity that is measured varies inversely with the density of the process stream. The unit of the radiation detector converts this energy into an electrical signal, which is transmitted to an electronic module.