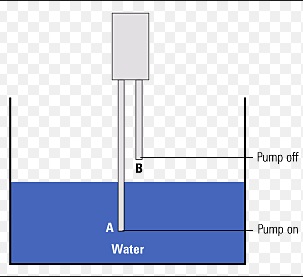 There are so many level measuring techniques in this session we are going to discuss about Conductivity probes.Conductivity probes operate on the principle that most liquids conduct electricity. Figure illustrates how a typical conductivity level probe operates

An electrode is shown above the liquid level on the left side of the Figure. In the circuit is open and no current flows through the electrodes of the level probe to energize it. When the liquid level increases, it establishes a
conductive path in the electrode, closing the low level switch. When the level probe is activated, close the dry contacts on the instrument. This contact closure can be used to operate electrical relays, pumps, solenoid valves or other equipment. These conductivity switches are available in a variety of configurations, so you can use them to control a component with or without connection or to control multiple devices. A typical application would be to control the liquid level in a sump.

The ladder diagram of the relay in the Figure shows how you can use two conductivity probes together with an electromechanical control relay (CR1) to control the sump pump in the Figure. To begin, suppose that the sink is empty, therefore, both level probes are open and the control relay is deactivated. Then, as the liquid level rises, the low level switch (LSL-400) will close when the conductive liquid covers the probe. The control relay CR1 remains de-energized because the high-level switch is still open. When the level goes up to the high level switch (LSH-400) it will close, energizing CR1.

The first set of contacts,CR1(1), of the control relay are wired across the high-level switch contacts.
This is called a seal-in circuit, and it keeps CR1 energized after the liquid level drops below the high-level switch. When CR1 energizes, the second set of relay contacts CR1(2) and energizes sump pump relay CR2, turning on the sump pump. When the liquid level is pumped down below LSH400, it will open this level switch, but control relay CR1 will remain ON because the seal-in contacts are still closed. When the liquid level falls below level switch LSL-400, the contacts open, turning off CR1 and the sump pump. The pump will remain off until the sump fills up to the high level probe again. Then the control action will be repeated.

some other level measuring techniques are given in the link below

What is a level switch and what are its types?