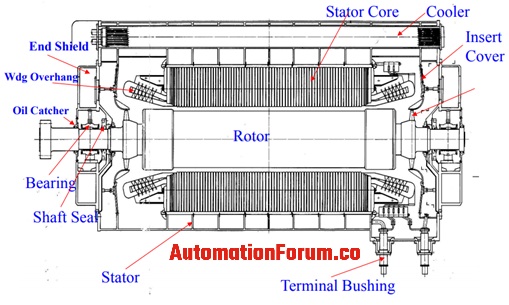 What are the major faults and hazards that can be seen in a generator?

What are the parameters that must be monitored during the normal generator operation?

What are the types of generator protection?

This type of protection would provide high-speed protection for most of the faults. Mostly the differential protection is done to protect the stator winding in case of any internal faults, so in case of this fault there could be a high fault current and due to this fast clearing will be required. By this protection, we can detect the winding faults in the generator. So in order to do this protection current transformers and differential relays are required.

The current transformer is placed at both ends of the generator winding. One of the current transformers is placed on the neutral side of the CT and the other one is set on the generator’s line side. So the difference of two currents of the two current transformers would flow through the relay. So if there is no fault there won’t be any differential current through the relay. In case if there is any fault then the differential current would flow through rely and thus the relay would operate. This type of protection will be only for the faults in the protected zone, so the stability of the unprotected zone should be considered too.

This is the fault that is caused by the failure of the insulation winding of the stator. This can cause the machine core damage and to do the repairing, it would cost a lot of money so earth fault protection is really important in a generator. During this fault, the resistive fault current must be reduced by the neutral grounding transformer and also by the secondary loading resistor. Mostly the stator winding is protected by detecting the voltage across the secondary loading resistor. The low-frequency injection method is used to protect the stator winding.

So in this method, an external low-frequency voltage will be injected to achieve the stator earth fault protection. A transformer is used in series with neutral earthing resistance. The low-frequency alternating voltage will be given to the terminals of the machine. So during the normal conditions, there will be only a small current flow through the stator due to the high impedance of this path at low frequencies. In case of any earth fault the measured current increases because of the smaller impedance of the earth fault path. A relay is used to detect and operate if the current increases due to the earth fault or due to the stator winding.

There is a DC supply for the rotor winding and this would create a flux, so if the flux is rotated by the prime mover then it would cut the stator winding so that the current and voltage will be induced. The DC supply is from the exciter and it doesn’t need to be earthed. So in case of an earth fault, there won’t be any flow of the fault current and because of this, the machine can run properly. In case if there is a second earth fault at any other point in the winding then it would be a problem. So during this second earth fault, there will be shorting out of a winding portion. This could cause an increase in field current and also can cause the conductor to burn.

So by doing the rotor earth fault protection we can protect the machine this protection would inject a DC voltage into the rotor circuit. The voltage polarity will be reversed during the low frequency. So when the polarity of the DC voltage is reversed then a current will be applied to the earth due to the rotor winding capacitance. During normal operation, the current due to the rotor winding capacitance will be discharged to zero. In case of any rotor earth fault then the steady-state current won’t be zero and by using its magnitude we can calculate the fault resistance.

In case of the failure of the prime mover, the generator which is connected in parallel to the power system would act as a motor. Active power will be drawn from the power system so that the alternator can be covered and also the mechanical losses of the prime mover. The power protection tripping can be reversed with the help of the time delay so there won’t be any false tripping in case of any system fault. The time delay would operate without turbine tripping.

This type of protection is done to prevent over-speed damage to the turbo alternator. Sometimes the rotor which is used won’t be able to handle a certain speed. In this protection system, the low power measurement can be done in the same way as in reverse power protection. A time delay is used to do the operation without any turbine trip.

If a balanced load is connected to the generator then the phase current would have equal magnitude so while the wave created by the rotation of stator current with the rotor and there won’t be any eddy current in the rotor parts. In case if there is an unbalanced load connected to the generator then there will be a negative sequence current and this would create a wave that will be in opposite direction to the rotor rotation. This wave would cut the rotor at twice the rotational speed and it would create an eddy current flow, and due to this, there could be severe vibration and also cause the heating of rotor and stator. In order to do this protection an inverse time, overcurrent relay is used.

The overvoltage protection of the generator can be provided by using a frequency insensitive relay. The relay must have an instantaneous unit and a time delay unit with inverse time characteristics. So in case if there is an increase in the load of the generator then the relay would operate and the machine will be tripped.

In case if the excitation of the generator fails, then the active power will be decreased and there will be an increase in reactive power which is drawn from the system. So the rotor would get heated because of the induced current in the winding and this would affect the winding or the core. So in order to prevent this, the field current should be monitored and also the phase current and voltage.

The over frequency could be formed if the mechanical power input to the generator is more than what is required. This type of protection would prevent protection the throttle control failure and also the over-speeding. This protection can be achieved by using a relay, so in case if the frequency exceeds the specified value then proper actions will be taken.

How to do the transformer protection?

What is a Junction box, and its applications?

Various circuits involved in Electronics and their components