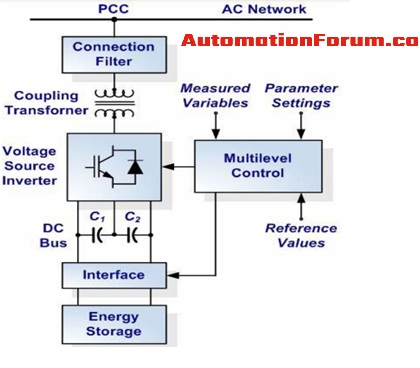 What are the functions of a power conditioner?

The major function of a power line conditioner is to take the power and to make changes in the power according to the machinery. The surge suppressor is an example for the power conditioner, voltage spikes could happen during the thunderstorm, the surge protector would be able to prevent the flow of electricity to the equipment and thus it can prevent the damage of the equipment.

What is a linear and nonlinear load?

What are the major types of power quality conditioners?

The distributed static compensator is widely used to compensate the linear, nonlinear, balanced, and unbalanced loads. It has a voltage converter, coupling transformer, and a DC storage device. The DC voltage will be converted by the voltage converter to an AC voltage and this voltage will have a similar phase as the AC system. The active and reactive power transfer between the system and the DSTATCOM can be controlled by varying the phase and magnitude of DSTATCOM voltage. So with the help of this, we can generate active and reactive power according to the requirement.

Major functions of the DSTATCOM

The DSTATCOM can be connected to the non-linear dynamic loads, the voltage source converter section would create a current waveform with proper magnitude, frequency, and shape. The transformer which is in the compensation system would add and scale this created waveform and place it in the load current. The response time of the DSTATCOM is really quick and thus it can eliminate the power quality problems.

The DSTATCOM can be widely used for compensation purposes, transmission loss reduction, and also would be able to improve the electric grid operation all of this is achieved due to the ability of the DSTATCOM to supply the active power effectively.

The electronic power filters are electronic circuits that would pass a certain band of frequency and would reject the frequency which is not in this band. This type of power filter can compensate for the harmonics without using any reactive power. This type of filter would compensate for the voltage or current harmonics by injecting the harmonic signal measured. The injected voltage or current harmonic signals into the power system network would have the same magnitude and different phase, of the measured harmonic signal.

This type of filter can compensate for the current system distortion which is caused by the nonlinear loads. This type of active filter would impose high impedance by creating a voltage that has the same frequency of the harmonic component of the nonlinear load which is to be removed. This device would act as a controlled voltage source.

This type of power filter operates by controlling the amplitude of the voltage component across the coupling transformer. So by doing this the power factor of the power distribution system can be adjusted. There will be a higher voltage across the filter capacitor due to the control of the load power factor. This type of power filter will be very useful for power conditioning.

The UPQC is a combination of shunt and series active power filters. The shunt and series power filter are used to compensate for the source current and also to mitigate the problems in the source voltage. So by using a UPQC we can solve most of the power quality problems. This device is composed of two voltage source inverters and it is connected to the capacitor. One of the voltage inverters will be connected in series with the AC line and another one will be connected in parallel to the AC line. The UPQC would decrease the harmonics in the supply current and because of this, the current quality can be improved. This device can compensate for the voltage distortion and also the voltage imbalance.

What are the major types of power problems?