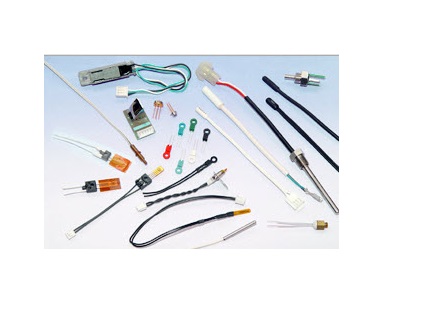 The most common temperature sensors  are thermocouples, thermistors, and resistance temperature detectors (RTDs).Fiber-optic sensors, while more specialized, are growing in popularity for temperature measurements

Thermocouples, The most popular temperature sensors, are effective in applications that require a large temperature range. They are inexpensive ($1 to $50 USD) and have response time fractions of a second. Due to material properties and other factors, temperature accuracy of less than 1 °C can be hard to achieve.

RTDs are nearly as popular as thermocouples and can maintain a stable temperature reading for years. In contrast to thermocouples,RTDs have a smaller temperature range (-200 to 500 °C), require current excitation, and have a slower response time (2.5 to 10 s).RTDs are primarily used for accurate temperature measurements (±1.9 percent) in applications that are not time critical. RTDs can cost between $25 and $1,000 USD.

Thermistors have a smaller temperature range (-90 to 130 °C) than previously mentioned sensors. They have the best accuracy (±.05°C), but they are more fragile than thermocouples or RTDs. Thermistors involve excitation like the RTD; However, the thermistor requires voltage excitation rather than current excitation. A thermistor typically ranges between $2 and $10 USD in price.

Another alternative is the use of fiber optics to measure temperature. Fiber-optic temperature sensors are effective for environments that are hazardous or where there could be regular electromagnetic interference. They are nonconductive, electrically passive, immune to electromagnetic interference (EMI)-induced noise, and able to transmit data over long distances with little or no loss in signal integrity

What is SAMA diagram?

What is an RTD ? How RTD works ? Advantages and Disadvantages of RTD?

What is an RVDT and how does it work