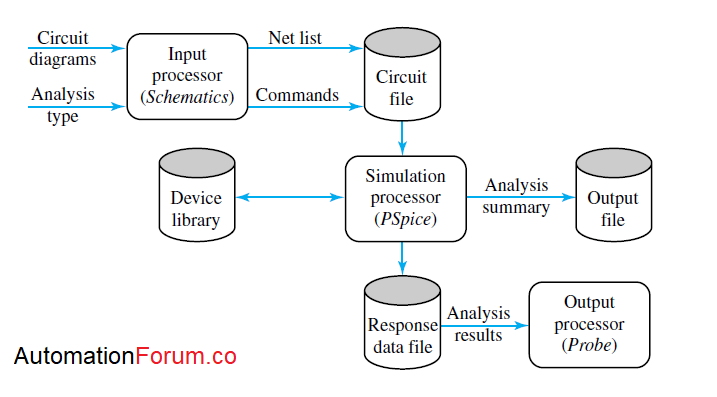 The computer-aided tools can free the engineer from tedious calculations, thereby freeing more time for doing the kind of creative work a computer cannot do. A circuit analysis program is known as SPICE, an acronym for a simulation program with the emphasis on integrated circuits. Several commercial products based on SPICE have been developed for personal computers and workstation platforms.

The first step for describing the circuit is to number the circuit nodes. The reference node (or ground node) is labeled as zero (0), and in PSpice syntax the other node names can be numbers or letters. In order to describe the circuit, statements are written with a separate statement for each circuit element. The name of an element must begin with a particular letter identifying the kind of circuit element.

Sometimes, for clarity, additional letters following a numerical value may be used; but these are ignored by SPICE. For example, 4.4 KOHMS is recognized as the value 4400, and “ohms” is ignored by the program. Comment statements are identified by an asterisk (*) in the first column, and these are helpful for making the program meaningful to users. PSpice also allows inserting comments on any line by starting the comment with a semicolon.