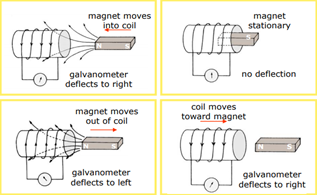 Electromagnetic induction is the process of producing a voltage by using a magnetic field and current in a complete circuit. It was first discovered by Michael faraday he started his work by using a different combination of wires, magnetic strengths, and currents

Electromagnetic induction is created by moving a conductive substance through a magnetic field. When the magnet moves back and forth a current will be induced in the wire

What is Magnetic Flux

How to calculate the amount of magnetic flux

The amount of magnetic flux can be calculated by the equation

The flux we calculated is the flux through one turn of the coil in order to calculate the magnetic flux In all the turns of the coil, we need to use a quantity called magnetic flux linkage which can be defined as

N is the number of turnings

How can we change the flux over a period of time

No E.M.F is produced

Electrical generators follow the same method to produce e.m.f by moving the conductor

It is used to detect the flow rate of arterial blood, it uses the EMF induced in the flowing blood. A magnetic field is set up across the artery, and the connection is made to two small electrodes in contact with the artery

It uses the EMF principle to eliminate the need for batteries

Sound waves enter the filter of a microphone, a diaphragm is situated in the filter the sound waves will vibrate the diaphragm which in turns moves the coil and the coil is wrapped around a magnet, so the movement of the wire in the magnet will create a current in the wire.

What is TK-3 Calibrator ?

What is a rectifier diode? and their types