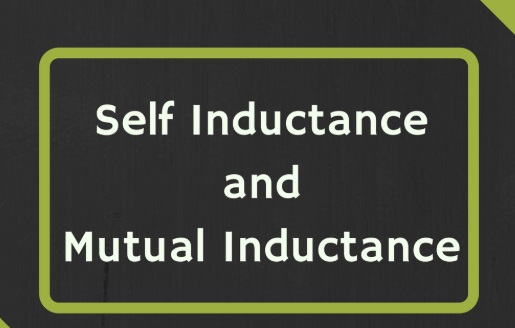 Coil ‘B’ is connected to galvanometer. coil ‘A’ is connected to a cell. The two coils are placed close together. The coil connected to a supply is called primary coil A. The other coil ‘B’ is called secondary coil. The coil in which emf is induced by mutual induction is called secondary coil. When current through coil ‘A’ is established by closing switch ‘S’ then its magnetic field is setup which partly links with or threads through the coil ‘B’. As current through ‘A’ is changed the flux linked with ‘B’ is also changed. Hence mutually induced emf is produced in ‘B’ whose magnitude is given by faraday’s law and direction by lenz’s law. The property of inducing emf in one coil due to change of current in other coil placed near the former is called mutual induction and this property is used in Transformers and Induction coils.

Inductance is defined as the property of the coil due to which it opposes the change of current in the coil. This is due to lenz’s law.

Self inductance is defined as the webers turns / ampere of the coil and is denoted by the letter ‘L’ and its units as Henry( H). The expression of self Induction by definition. is

When current in coil ‘A’ changes, The changing flux linking coil ‘B’. Induces emf in coil ‘B’ and is known as mutually induced emf. Mutual inductance between two coils ‘A’ and ‘B’ is the flux linkages of one coil B due to one ampere of outset in the other coil ‘A’