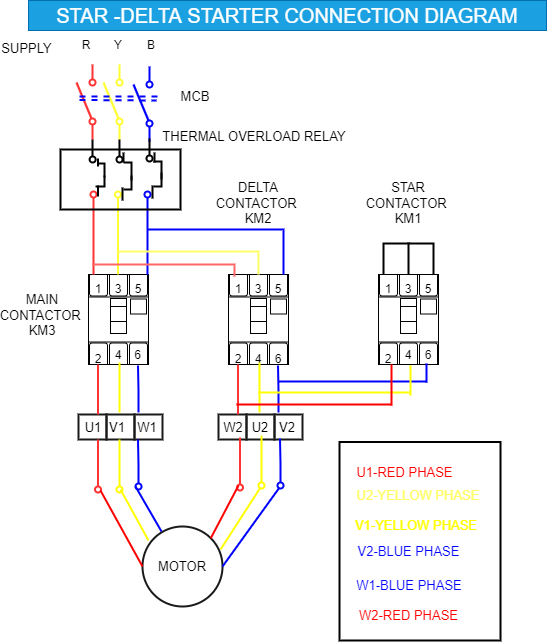 What is the Function of motor starters?

1. Start and stop the motor

4. Protect motor and other connected equipment from sustained overload, no voltage, under voltage, single phasing, etc.

What is meant by a star?

In each 3-phase alternator, six terminals come out from 3 coils placed at 120˚ apart from each other. If any three ends starting or finishing are connected at one point and we get supply from the other three-point the connection is called a star. The junction point is called the Starpoint or neutral point.

In a star Connected system IL=Iphase.

Star-connected systems require less insulation level and are used where a low starting current is required.

What is meant by Delta?

line voltage = Phase Voltage so, the Insulation level is high.

For high starting torque, a delta connection is required.

A delta connection in 3 phase induction motor is, the opposite end of three windings are connected (or) the end of each winding is connected with the starting point of another winding and three wires are taken out from the winding joints.

A star connection in 3 phase of induction motor in which the three winding each one end is connected in common junction and another end is connected to line voltage or supply voltage separately.

Difference between star and delta?

Why star delta starter is used?

Star delta starter is used to reduce the current flow at the starting of the three-phase induction motor to avoid sparking, overheating, coil burning, etc. In the star connection, the supply voltage is lower than the delta connection.

So basically, the star delta starter has both the star and delta connection arrangement and also it has a timer. So, at the starting time, the motor is connected to the Star connection. After a few seconds which is already set in the timer that will connect the motor from the star to the delta connection.

Suitable for applications where the required starting current is low and also the line current drawn must be minimum.

Star delta starter can only be useful for 6 terminal delta connected induction motors where all 6 terminals can be accessed.

As the initial starting current compared to nominal current is 1/3 times high, starting torque is also reduced to 1/3 times. Hence it provides only 33% starting torque and if the load connected to the motor requires higher starting torque, then very high transient and stress are produced while changing from star to delta connection. It causes many electrical and mechanical break-down to occur.

It requires more cables from the star delta starter to the motor compared to the DOL starter.

Star delta starter will fail to start the motor if load connected with the motor has load torque higher than 50% of motor rated torque.

In this method of starting during the transition from star to delta, if the motor does not reach at least 80% of its rated speed then the current peak will be high same as in the DOL starter. It causes harmful effects on the contacts of contractors. Hence it would not be reliable.

If the motor too heavily functions then there will not be enough torque to accelerate the motor up to the desired speed before switching over to the delta position.

Some useful questions and answers related to star-delta connection

What happens if the Motor is connected to Delta connection at starting?

The secondary or rotor coil of the induction motor is always short-circuited. So, if the motor is connected to the delta connection, it will get a very high voltage to the winding, the motor will draw a very high starting current which may cause the burning to the coil.

What happens if the motor is always connected to the Star Connection?

What is the Difference between Star Delta Starter and DOL Starter?

DOL starter means Direct On Line Starter, With a DOL starter, the motor is only connected with the Star connection or Delta Connection (where high starting torque is required). It doesn’t change the connection. DOL starter doesn’t reduce the starting current. DOL starter provides a similar voltage to the motor at both starting and running conditions.