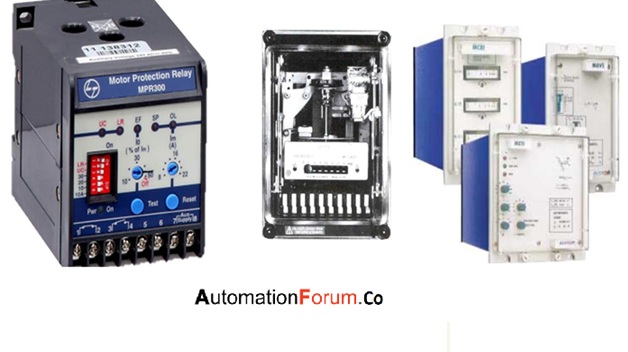 What is a protective relay

In a power system power reliability is an important factor and a power system is comprised of generators, transformers, distribution circuits, etc. in order to get a proper and uninterrupted power the power system failure must be quickly determined and the failed part must be disconnected from the power system. So there won’t be any interruption of power service if we detect the fault quickly. Protective relays are devices that are very useful in the power system. This device will detect and disconnect the faulty system. The protective relay will detect the faulty section and isolate it from the rest of the system. A relay can be considered as a switch that can be open and close circuits electromechanically and electronically.

The function of a protective relay is to remove the faulty section in a power system so there won’t be any power supply interruption and the equipment will be protected. A relay can detect the abnormal conditions in an electrical circuit, it is achieved because of the constant measurement of the electrical quantities. There are certain electrical quantities that may change in case of fault conditions they are voltage, current, frequency, phase angle.

What is the purpose of protective relay

What is the difference between fuse and relay

There are different settings for relay and they can be reset, well it is not possible in case of the fuse. The fuse only has a specific characteristic for a certain type. Like a relay, fuses cannot be reset they need to be replaced.

A relay should have certain qualities such as selectivity, speed, sensitivity, reliability, simplicity, and economy. If all this quality is present in a relay then it can be selected and installed so that the relay would work properly and efficiently.

Speed – the protective relay must be able to disconnect the faulty section from the rest of the system very quickly otherwise there is a chance for the damage of the electrical equipment because of the fault current.

Sensitivity – it is the ability to detect the fault or abnormal condition in a protective zone.

Reliability – it is the ability of the protective system to work under the predetermined conditions, so there should not be any false tripping or no failure to trip

Economy – Economical factors must be considered while selecting a protective system if the apparatus which needs to be protected is very important so we must not consider this.

How do protective relays work and what is relay principle

There are different types of protective relays and some of them are different in their operation method such as an electromechanical relay does its operation by either magnetic attraction or by magnetic induction. Armature type relay has a pivoted lever supported on a hinge or knife edge pivot, which carries a moving contact. Armature relays could work in either AC or in DC. Relay works as a protective switch and they are used in power systems, but in certain cases relays are used as sensing devices such as in higher power applications, so in case of any abnormal condition the relay would sense it and sends the signal to the circuit breaker. Protective relay senses the fault position and gives a signal to the circuit breaker, the circuit breaker will disconnect the faulty portion after receiving the signal

The above image shows the connection of the relay and we can see the primary winding of the current transformer is connected to the line which is to be protected. The secondary winding of the current transformer is connected to the relay coil, and there is a tripping circuit it could be AC or DC and there is a circuit breaker. So in the case of a short circuit at point F, there is a huge hike in the current flow, and this current would reach the relay coil and the relay will operate due to this by closing its contact. So due to this the breaker trip circuit will close and thus the circuit breaker opens and disconnects the faulty section.

How protective relays are connected in a power system

What are the types of protective relay

Types of the protective relay according to their construction and operation

Classification based on the speed of operation

These relays operate very quick, so there is no time delay in this type

In this type, a time delay is occurred because of relays decision time and also because of the trip action

This type of relay operates within milliseconds

Classification of protective relays according to their functions

Other types of relays

What are the advantages of using protective relay

What are the applications of protective relay

What is a pressure control valve and how does it work

Learn how to read an electrical drawings?