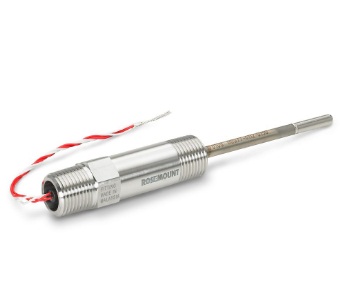 Resistance thermometers is also called RTD (resistance temperature detector). It operates on the principle that, electrical resistance of a substance changes with temperature. The substance may be a semiconductor metal. The traditional sensing element of a resistance thermometer consists of a coil of small wire diameter to a precise resistance value. The most common material is platinum, although nickel, copper, and nickel-iron alloys compete with platinum in many applications.

The material must have

(i) a continuous and stable relationship between resistance and temperature and

Platinum is the best metal for RTD because it follows a very linear temperature resistance relationship and follows the  R vs. T ratio in a highly repeatable way over a wide temperature range. The unique properties of platinum make it the material of choice for temperature standards in the range of -272.5 ° C to 961.78 ° C, and is used in the sensors that define the International Standard for Temperature, ITS-90 between -190 ° C  and 660ºC

The industrial resistance thermometer is a combination of a thermometer bulb, a measuring circuit and an automatic balancing potentiometric instrument. The thermometer bulb is manufactured in various forms and consists of a thin wire coil wound in insulating material. The resistance wire is arranged so that a good thermal conductivity is provided and a high heat transfer rate is obtained. The windings must be made in such a way that the physical tension is negligible as the cable expands and contracts with the change in temperature. The resistance bulb is tempered and aged after manufacture to stabilize its electrical properties. The most common measurement method is the Wheatstone bridge with several modifications necessary for use with a resistance thermometer bulb.

RTDs in industrial applications are rarely used above 660 °C. At temperatures above 660 °C it becomes increasingly difficult to prevent the platinum from becoming contaminated by impurities from the metal sheath of the thermometer.

How to calibrate RTD transmitter

What is submersible pressure transmitters?

Basics of Thermistor – Advantages and Disadvantages

What is a Resistance temperature detector and what are its types?