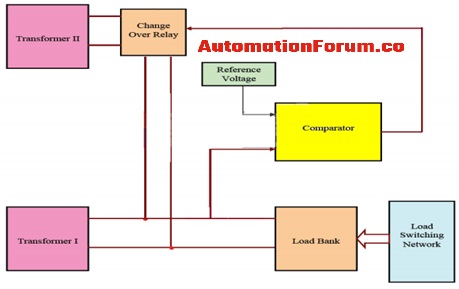 What is automatic load sharing?

The automated load share system is inevitable in many industries, where power is really important to do the industrial process. The major part of an automated load share system would be a microcontroller, load sharing relay, load sensor, etc. So in case if there is any overload in a system then the load sensor would detect it and the signal processor would transfer this signal and the microprocessor would sense the load. The load sharing relay would distribute the load.

How load sharing is done in a transformer?

How load sharing is done in a generator?

The load sharing of the generator is pretty much the same as in the case of the transformer, a load sharing relay is used. The load-sharing relay will be placed in the generator feeder. So by this, the power created by the generator can be determined and this value will be compared with a predetermined value. So if the relay measures the power which is above the set value then the relay would provide a decrease pulse to the governor. In case if the measured power is below the set value then the relay would give an increased pulse to the governor.

Why synchronizing is important for load sharing?

What are the advantages of load sharing?

What are the applications of load sharing?

Why synchronizing is required in an electrical power system?

What is an automatic voltage regulator?

What is earth resistivity?

Basics of Electric Motors for Beginners