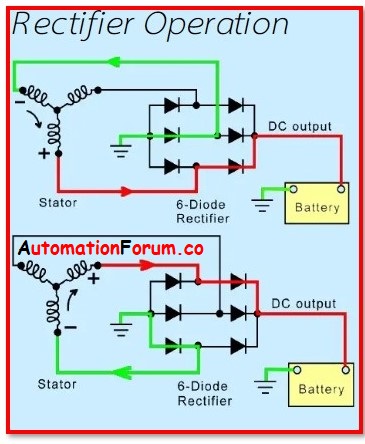 A machine that transforms mechanical energy into electrical energy in the form of alternating current at a particular voltage and frequency is referred to as an alternator. Synchronous generators are another name for alternators.

The only form of energy that is converted is an alternating current. Most alternators use a spinning magnetic field along with a stationary armature in order to make it simple and affordable. Depending on the needs of the location, a fixed magnetic field can also be employed with a linear alternator or rotating armature. For instance, an alternator can also be used to refer to an AC electrical generator since this term is typically used to describe a tiny rotating equipment powered by an internal combustion engine.

An alternator is a generator that supplies power to the vehicle and recharges the battery. All cars with a regular internal combustion engine will have an alternator, with the exception of some hybrid versions. A belt usually runs around the alternator, which is typically located to the front of the engine.

Since alternators use electromagnetic to generate electricity, they acquire their name from the term “alternating current” (AC). The interaction between the stator and rotor creates through electromagnetic.

The parts of an alternator and their purposes are listed below:

An iron ring called a stator has multiple wire coils twisted around it. When a magnetic field is created, the portion of the stator that serves as the alternator’s body produces an electrical current.

The alternator’s rotor, which rotates the pulley and powers the belt system, is a moving component inside the alternator. It functions as an electromagnet that spins.

A component that regulates how much power comes from the alternator to the battery is the voltage regulator. As it is built with a variety of functions and operates according to their applications, it regulates the charging process.

During the charging process, the rectifier is utilised to convert direct current (DC) from alternating current (AC) output.

Direct current can be obtained and used to power the rotor through the slip rings.

The pulley is a component that is joined to the drive belt system and rotor shaft. Even though the drive belt transfers the engine’s spin to the pulley. The charging process is spurred on by rotation.

In order to preserve the machine’s efficient operation, the heat that alternators produce must be cooled after a predetermined amount of time. These fans are constructed with vents and an aluminium body to effectively dissipate heat. For further cooling, these are also fitted with revolving fans. The most recent kinds of alternators include internal cooling fans, while earlier ones had exterior fan blades.

The back of an alternator has a number of terminals or connection points for a variety of purposes:

When and where is an Alternator Used?

How does an alternator function?

The following are the functions of alternators:

An alternator’s main function is to recharge a car battery so that other electrical parts of the vehicle can be powered.

The battery is charged, which supplies the starter motor with the electricity it requires to start the vehicle. Alternators also produce energy when the automobile is moving in order to supply the battery and electrical system.

Generators and alternators both perform the same functions.

The vehicles utilize an alternator, which improves in battery recharging. In order to accomplish that, the alternator must transform mechanical energy into electrical energy.

How Does an Alternator Generate Electricity?

The engine of the car acts as the generator of electricity. However, older vehicles may have a separate pulley running from the crankshaft to the alternator. Typically, alternators are driven by the engine’s crankshaft by a serpentine belt. The alternator’s rotor spins at a very high speed inside the stator as a result of the movement of the belt or the mechanical energy it generates.

Upon starting to rotate, the rotor generates power. In order to pass through the stator’s copper wiring and generate a magnetic field, the magnets that surround the rotor are strategically positioned. The stator captures the voltage that the magnetic field’s creation creates. The voltage regulator, which controls how much voltage is delivered to the battery and is transferred to the vehicle.

How does the battery get charged by the alternator?

The power from the alternator must be transformed into a form that the battery can use it. This is because there are various currents or directions in which electricity can flow. In contrast to alternators, which produce alternating current (AC), which occasionally flows backward, car batteries use one-way direct current (DC) electricity. In order to convert AC power meant for the battery to DC, a diode rectifier is used before it reaches the voltage regulator. The battery can use the electricity to recharge itself upon conversion.

Depending on their designs and applications, alternators can be categorised in a variety of ways.

According to their intended use, the 5 varieties of alternators are as follows:

Alternators are also divided into categories based on design:

Advantages of An Alternator:

The benefits of an alternator include

Disadvantages of An Alternator:

The disadvantages of an alternator include:

Application of An Alternator:

An alternator is used for the following things:

What is a transformer and explain its working principle?

What is meant by High Rupturing Capacity (HRC) Fuse?