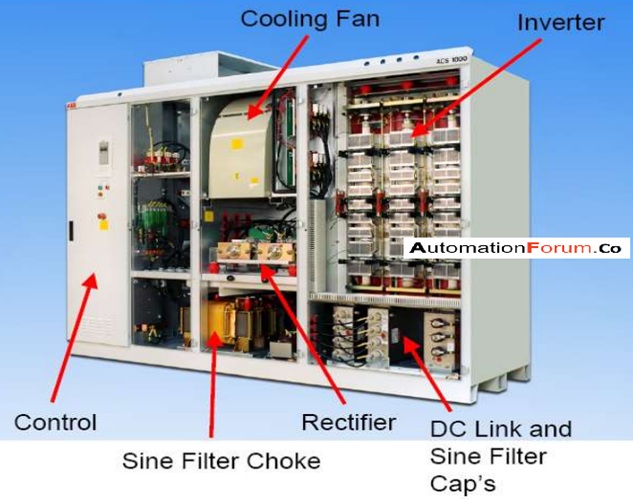 What is a variable frequency drive

How to install a VFD

The variable-frequency drive must be installed properly otherwise the drive could malfunction. So the installation of the VFD must be done by an experienced person. Certain precautions must be taken while installing a VFD they are the vibration level of the place must not be high where the VFD is installed and the temperature should be very low. The drive would heat up during the operation so it must be installed in a non-flammable place. It must be installed in a place where it won’t be bothered by moisture and sunlight. If the drive is installed vertically then it would be helpful to dissipate heat. If more than one VFD is installed then a cooling fan can be used. The VFD mounting must be done with the help of nuts and screws so we can ensure proper installation. The drive must be isolated from dust, water, and oil.

How to do the VFD commissioning

While commissioning the VFD make sure the starter panel installation is complete and make sure that there is no damage in the starter panel. If any component is damaged then it must be repaired. Check the details of the insulation resistance values of the incoming and outgoing power wiring. Make sure that all the BMS wiring is finished. We must also check the cable dressing inside the starter panel. Make sure all the control wiring is done properly. Make sure the ratings of MCB, MCCB, and fuses are correct. All the wiring termination must be checked. We must check all the earthing connections and supporting insulators. The phase sequence and incoming voltage must be checked. The operations of the selector switch and pushbuttons must be checked. Check the speed limit and direction of rotation of the motor.

How to select VFD

In order to select a VFD to control the motor, we must first know about the motor and the system. The motor details can be known by checking the motor nameplate and then we could know certain details about motor such as the horsepower, voltage, RPM, etc. We must also gather some details about the system such as the load type, like if it has a constant torque or variable torque. The range of speed and control method. So by gathering all these details we can easily select a VFD. The load horsepower must be known so that .we can select VFD which is compatible with it. By using VFD we could vary the speed so the operation is done at different speeds and it can cause mechanical resonance in the driven equipment. Sometimes VFD can generate harmonic currents and this could baldly affect the electrical distribution system and equipment operation. So we can use a filtering device to solve this problem.

We should compare the full load amps (FLA) of the motor to the VFD that we have chosen for the installation. We must select the VFD according to the voltage of the motor ad this is really a difficult task to achieve. We must also consider the load while selecting a VFD the load could be of variable torque or constant torque. By using VFD we can vary the motor speed so while doing this the motor must not run less than 20 percent of its allowed maximum speed.

What are the major components of VFD

How to troubleshoot a VFD

If the operation of VFD goes wrong, then we must check the basics such as the connections, temperature, controller, etc. Mostly when an error happens the proper way to troubleshoot is by the visual inspection. If there is dirt or corrosion in the drive it must be removed first. After that, the wiring connection must be checked. Make sure all the connections are proper and check the incoming supply. All of the troubleshooting processes must be done by a qualified person. At last, the drive output voltage and current should be checked.

How does a variable frequency drive work

Usually, a motor draws more current than its rated current when it is connected to a supply. The motor rotates in a synchronous speed, so VFD is used to change this speed and it is done by changing the frequency of the applied voltage to the motor. So when a VFD is connected to the supply of the motor it will start the motor with low frequency and gradually it will increase the frequency. A VFD can convert the electrical power to a required form for controlling speed, torque, and direction of rotation of AC motor. The rectifier section of the VFD would convert the AC power to DC power. This rectified DC power is then transferred to the intermediate circuit which consists of inductors and capacitors. After that, it is transferred to the inverter section which will convert the DC power to AC power of variable frequency and voltage. This is done with the help of a pulse width modulated signal. The required output is produced by the help of semiconductor switches and the most commonly used semiconductor switch in VFD is IGBT.

What are the applications of VFD

What are the advantages of VFD

What are the disadvantages of VFD

What is a capillary tube and why do we need it