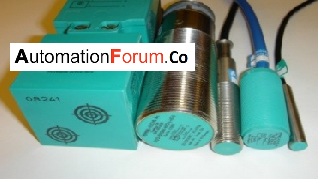 What is a proximity sensor and what is it used for

What are the features of proximity sensors

What are the advantages of contactless proximity sensors

What are the types of proximity sensors

These sensors use the inductive property to sense the object. The inductive proximity sensor is composed of the coil, oscillator, trigger circuit, and output. The oscillator is an inductive capacitive tuned circuit that creates a radio frequency. The oscillator will create an electromagnetic and it would be emitted away from the sensor. So when a metallic object comes near to this sensor the inductance and power losses in the coil vary. Due to this operating principle, inductive proximity sensors are only used to detect metallic objects.

A capacitive proximity sensor is composed of two plates and one of them is the target plate. These two plates are separated by an air gap. One of the plates is connected to the oscillator and the other one is to detect the object. When the sensors receive the power the oscillator will detect the external capacitance between the target and the internal sensor plate. This will complete the circuit and gives a proper feedback path for the output circuit to check. Capacitive sensors can be used for vibrating environment and it can also be used at high temperatures. These sensors are capable to detect many kinds of objects such as plastics, solids, liquids…

The operation of the ultrasonic sensor is based on the emission and reflection of the acoustic waves between the object and the receiver. These sound waves travel through the air and the traveling time is measured. The ultrasound is the sound frequency that is above the human hearing limit. So high-frequency sound waves are used to detect the object. These sensors have the greatest switching distance and frequency so it can be used to check distant objects with very high speed.

These sensors use the visible or invisible light as the input, it uses optical and electronic means to detect the object. Mostly, LEDs are used as input. Mostly the receiver section is the photodiode. So its operation consists of transmitting the light by an LED and the interruption or reflection is checked to detect the object.

How to select a proximity sensor

What are the applications of proximity sensors

What is a water cut meter and where is it used?