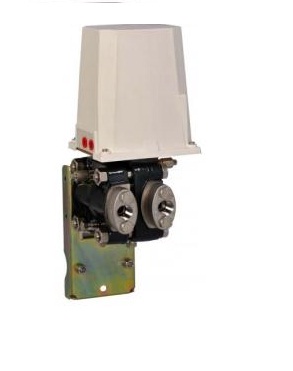 Pneumatic differential pressure transmitters are designed for measuring the pressure, differential pressure or level of liquids, steam, gas or air. The measured value is transmitted as 3 to 15 psi pneumatic signal to remotely mounted receiving equipment such as recorders, indicators or controllers or combinations of these items.

The system is depicted schematically in figure.Referring to the diagram, a pressure or a differential pressure is applied across the bellows capsule; this generates a force at the capsule in the direction of the arrow “A”, and which is applied to the lower end of the transmission bar. This force produces a moment relative to the fulcrum point (fulcrum diaphragm) and thus a moment of the force beam about the fulcrum. This movement, in the direction of the arrow at “B” varies the distance of the flapper,controlled from the upper end of the force beam, relative to the nozzle.

Air is supplied to the nozzle via a fixed restriction orifice and discharges to the atmosphere through the flapper nozzle gap and variations of this gap determine the back pressure value at the nozzle. The nozzle back pressure is sensed by the relay diaphragm which positions the double valve in the relay to allow supply air into the output system of relay. The output pressure from the relay is fed to the feedback bellows (and to the receiving equipment) the pressure rising until the bellows force balances that of the bellows capsule; at this point equilibrium is attained and the output pressure is proportional to and thus representative of the pressure at the measuring unit.

A reduction of the pressure value as sensed by the measuring unit bellows capsule will initiate a train of events in the opposite direction to that given above. As the pressure falls so the flapper nozzle gap widens because of imbalance of the forces on the force bar. To increase of the flapper nozzle gap causes the output pressure to fall reducing as it does so the bellows feedback force on the force bar until equilibrium is again achieved.

The revised output signal will again be proportional to the reduced pressure value.As the flapper movement necessary to vary the output pressure throughout its ranges is only 0.0003 inches (0.005 mm) the force beam remains in a substantially constant position and thus output varies in proportion to the applied forces and thus to the applied pressure.