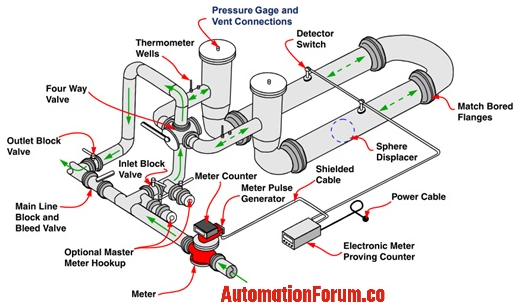 Why proving should be done to flow meter?

What are the factors that must be considered while doing the meter proving?

What are the major requirements for meter proving?

What is the difference between meter proving and meter testing?

The meter testing is the testing of the flow meter for any damages or faults, like doing a visual inspection of the device for leaks or for installation deficiencies. So a meter testing would mostly check for the faults in the meter, in meter testing there won’t be any comparing of the measured volume to the primary reference device.

How to select a prover?

What are the conditions that must be satisfied before doing the meter proving?

How to do the meter proving?

What are the types of meter proving?

In the unidirectional prover, there will be only one-way flow, so the unidirectional fluid flow will be used to calculate the volume, and then it will be compared to the standard volume. The operation of this prover is that the fluid will flow through the line and a sphere will be placed in the flow. So the sphere will pass the detector due to the fluid flow. So when the sphere comes in contact with the first detector then the detector would begin the measurement and when the sphere passes the second detector then the measurement will be stopped. Thus the flow of the fluid and the pipe area can be calculated by this, the fluid volume can be determined by evaluating the total volume that passes from detector1 to detector 2.

This type of meter prover would use the fluid flow in two directions, back and forth in the same prover pipe in order to calculate the volume of the flow, and then it will be compared with the standard volume which has been calibrated. This type of meter prover is widely used for many industrial applications, this is a reliable meter proving technique. In this type of prover, there will be a four-way valve, a flow reversing valve, and this would initiate the return of the bidirectional prover the sphere will be passed through the calibrated section of pipe in both directions. There will be a forward and reverse run meter because the meter proof is in U shape. In order to get stability, the round trip must be continued several times.

What is a velocity flow meter?

Working of a Differential pressure transmitter