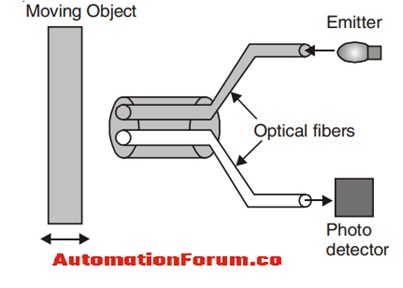 A fotonic sensor is a fiber optical sensor and it can be used to do the displacement measurement. This sensor could do non-contact measurement and its working is based on fiber-optic principle and it can measure displacement, vibration, and surface condition. The operation of this sensor is simple, the part of the light which is transmitted between the transmitter and the receiver bundles is dependent upon the separator and the bundle itself. If the target reflectivity varies then the transmission ratio would also change. So in order to solve this problem two receiving bundles are used, one would be known distance from the other and its resolution would be in the micrometer range, and there is no physical contact made with the target

How does a fotonic sensor work

This sensor has two fiber optic parts, one of these parts is connected to the light source and is termed as the transmitting fibers and the other section is connected to the photodetector. There is a light source, the light emitted is transmitted by an optical fiber. The object that is to be measured would be focused, by the light beam. The head has another fiber optic cable to detect the light beam reflected from the object and transmits the light to the photodetector. The light-sensing device would generate a voltage signal and it would be proportional to the received light amount. The amount of the received light will be proportional to the gap between the optical fiber head and the object. So if the head is fixed to a reference point and adjusts the zero settings, the voltage signal will directly give displacement after calibration.

If the gap between the probe tip and the target is zero then, the light won’t reach from the transmitter to the receiver, so there won’t be any intensity measurement. So if the gap increases then the reflected light would reach the receiver. The detected intensity would increase till the gap is in the equal order of the probe diameter So when this happens the receiving fiber would be fully illuminated and it has covered the maximum measured reflection.

What are the advantages of fotonic sensor?

What are the disadvantages of fotonic sensor?