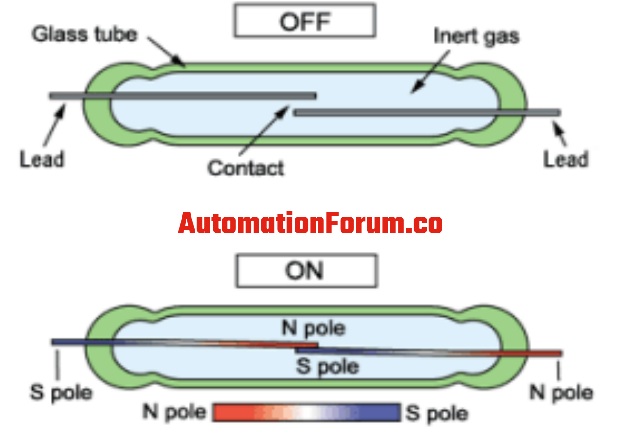 The magnetic proximity sensors’ body style could be rectangular, limit switch, barrel, slot, or ring. The barrel body type would be in a cylindrical shape and they could be threaded. The limit switch would be similar to the contact limit switch, in this the sensor is separated from the switching mechanism and it would give the detection signal. In the rectangular body type, it would have a block-shaped sensor. The slot type sensor is used to detect the presence of a vane when it passes through a sensing slot. The ring-shaped type is a donut-shaped sensor in which the object passes through the center of the ring.

What are the types of magnetic position sensor?

These sensors are actuated by the presence of a permanent magnet, and their operating principle is according to the use of the reed contact. The reed contact would have two low reluctance ferromagnetic leads which are enclosed in glass bulbs that contain inert gas. The reeds would get attracted in the presence of a magnetic field because of the magnetic induction and this process would make an electrical contact.  In the reed switch, the contacts are open normally and it would close if a magnetic field is present. The size and type of the magnet that is needed would be according to the type of reed switch and how it is built. The magnet and switch distance is really important if the distance between the magnet and the switch is wide then a strong magnet is required to interact with the switch.

What are the advantages of reed switch

The contacts are not affected by dust, corrosion, and oxidization because of the glass bulb and the inerted-gas. The maintenance of this sensor is really less, this switch would provide many electrical and mechanical characteristics together with various output function. The operation of this device is really easy and it is reliable too. The operating distance of this switch is good.

This type of sensor is composed of coils, a magneto-elastic core, and a sensing shaft. In this sensor, the change in the position of the sensing shaft would produce stress in the sensitive core. The core materials permeability would vary with stress, and thus it would affect the inductance of the winding wound around the core, the inductance is the function of the shaft position.

If the material is said to have magnetoresistivity then it has the ability to change its resistivity under the influence of a magnetic field. So this type of position sensor would check the magnetoresistive effect of the material under the influence of a magnetic field. So in order to detect the position, we can place the sensor to an angular or linear moving object with its complementary sensor or magnet stationary. The magnetoresistive property would occur in a ferrous material and can be applied as a thin strip to become a resistive element.

This type of sensor is similar to the inductive proximity sensor, the major difference is that it has a built-in oscillator, the oscillating coil is not of a half shell core design creating a magnetic field directed onwards, but a coil with a closed shell design, an example for this is a coil with a shielded ferrite core. By using a permanent magnet the core material of the oscillator core is saturated and this would cause a vibration in the oscillator current of the proximity sensor. A trigger state evaluates the change and converts it into a defined output signal. This type of proximity sensor would only react to the magnetic fields and not to any metallic objects.

The hall sensor IC can detect the change in the magnetic field when a permanent magnet comes in close proximity to it and generates an electric signal. This signal is then amplified and rectified to control the output signal of the switch.

What are the applications of a magnetic proximity sensor?

What is an optical proximity sensor?

What is an inductive proximity sensor?