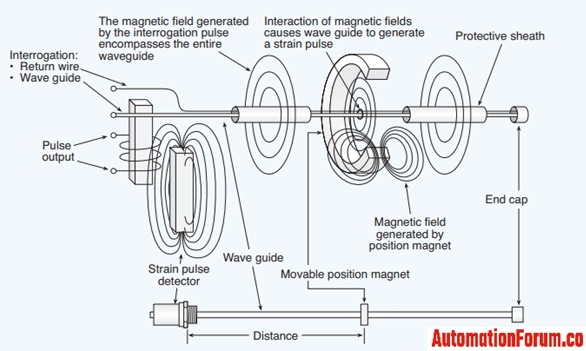 Magnetostriction is the process in which a ferromagnetic material can change its size or shape when it is placed in a magnetic field. This device can be used to do the position control. The magnetostrictive position sensor uses a ferromagnetic element in order to determine the location of a position magnet which is displaced along its length. This sensor has good accuracy and it is also resistant to vibration and shock. These sensors can be considered as a rugged device that can deliver 30 to 400mv signals at their output terminals and it would only need less or no additional signal conditioning. The important requirement in this sensor is that the waveguide must be as long as the measured stroke.

What are the parts of magnetostrictive sensor?

This sensor is composed of a magnetic core, a small amount of the current is applied to the core by using a drive coil that is around it. The senor has a steel housing and the drive coil and the core is situated inside it. The housing, piston, and core would act as a closed magnetic flux path. The materials that are used in this position sensors are transition metals and they are iron, nickel, and cobalt.

What are the features and functions of a magnetostrictive material?

The magneto-resistors can be used similar to a hall element, it is simpler because there is no need to create a control current. The magnetostrictive material will be exposed to a magnetic field to be sensed. The sensitivity of this device is higher than the hall device, the bidirectional effect between the magnetic and the mechanical states of magnetostrictive material is a transduction capability that is used for actuation and sensing.

How does a magnetostrictive sensor work?

In this sensor, a cylinder will be enclosed in a wire and it carries a pulsed current and a field is generated in the cylinder. A magnet encircles the structure to cause a local axial field. The position magnet provides the axial magnetic field, position magnet will be connected to the machine tool which is to be measured. The wave guide wire will be enclosed within a protective cover and it could be connected to the machine’s stationary part. The position magnets’ location is determined by applying a current pulse to the waveguide. During this process, the timer would start, and a sonic wave is created by the current pulse and it would be generated at the location of the position magnet.

The sonic wave travels along with the waveguide until it is detected by the pickup. This process would stop the timer. The time that is shown by the timer would be the distance between the pickup and the position magnet. A small piece of magnetostrictive material would be connected to the waveguide. The small piece of magnetostrictive material is called a tape and this tape would pass through a coil and it would be magnetized by a permanent magnet. In case if a sonic wave is propagated towards the waveguide, then stress would be created in the tape and this would change the tape’s magnetic flux density, because of this an output pulse will be created by the coil. This voltage pulse will be detected by the electronic circuitry and it would be converted into a required output.

What is a fotonic sensor?

Simple Explanation of Construction and Working of LVDT

What is an inductive proximity sensor?

What is an encoder and what are its types