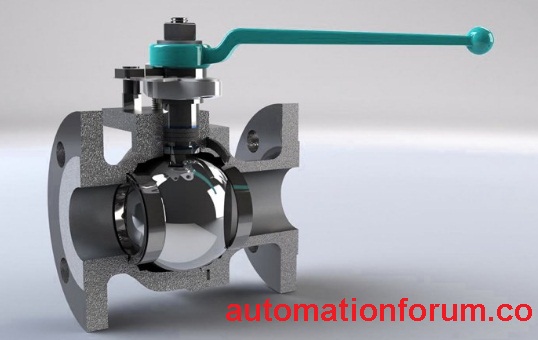 A ball valve is a rotational motion valve .The ball consists of a ball shaped disk .this ball shape disk rotates to stop or start flow. The ball has a hole, or port, through the middle so that when the port is in line with both ends of the valve, flow will occur.The ball performs the same function as the disk in the globe valve.

Other ball valve actuators are planetary gear-operated. This type of gearing allows the use of a relatively small hand wheel and operating force to operate a fairly large valve. Some ball valves have been developed with a spherical surface coated plug that is off to one side in the open position and rotates into the flow passage until it blocks the flow path completely. Seating is accomplished by the eccentric movement of the plug. The valve requires no lubrication and can be used for throttling service

The body of ball valves may be made of metal, plastic or metal with a ceramic center. from the point of sealing, the concept of the ball valve is excellent. Ball valves for manual control are therefore best suited for stopping and starting flow and moderate throttling. If flow control is automatic, the ball is continuously on the move, thus keeping this failure from normally occurring. Because the ball moves across the seats with a wiping motion, ball valves will handle fluids with solids in suspension

The stem in a ball valve is not fastened to the ball. It normally has a rectangular portion at the ball end which fits into a slot cut into the ball. The enlargement permits rotation of the ball as the stem is turned

A ball valve is generally the least expensive of any valve configuration and has low maintenance costs. In addition to quick, quarter turn on-off operation, ball valves are compact, require no lubrication, and give tight sealing with low torque.

Conventional ball valves have relatively poor throttling characteristics. In a throttling position, the partially exposed seat rapidly erodes because of the impingement of high velocity flow

How a Globe valve works?

How a Globe valve works?