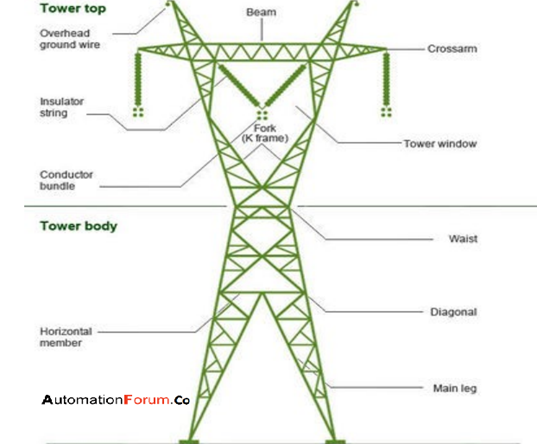 An electric tower or a transmission tower is a tall structure, mostly a steel lattice tower which is used to support the overhead power lines. They carry heavy electrical transmission conductors at a proper height from the ground and these transmission lines must be able to withstand strong wind and snow load. In order to withstand these natural forces, its design must be done considering the structural and electrical requirements. Transmission lines can carry electricity over long distances at high voltages, the size and height of the tower is depended upon the stresses to which they are exposed

What are the elements of a transmission line tower

Cross arm is used to hold insulators and the insulators are used to carry transmission conductors. The dimension of the cross arm depended upon the level of voltage to be transmitted.

It is the portion between the tower body and the peak of the transmission tower. Mostly the earth shield wire will be connected to this tip peak

How can we determine the height of the tower

The height of the tower is determined by certain factors they are minimum permissible ground clearance, maximum sag, the vertical spacing between conductors, and vertical clearance between the ground wire and top conductor.

What is a stub-cleat arrangement

The anchoring arrangement of transmission tower legs consisting of inclined angle with bearing cleats at the end, all embedded in the concrete foundation is called the stub or stub-cleat arrangement. A stub should be set in a manner so that the distance between the stubs, their alignment and slope are as per design and drawing

What are the conductors which are used in transmission power lines

This type of tower is used for voltage ranging from 110-735 kV, they can be easily assembled and these towers are suitable for power lines that cross very uneven terrain.

This tower is designed for voltage ranging from 230-735 kV, this type of tower is more economical than the double circuit and waist type tower.

Because of its simple design, this tower is easy to assemble and its voltage range is up to 735 kV. This type requires less galvanized steel than the guyed-V tower making it lighter and less costly.

What is HVAC system?