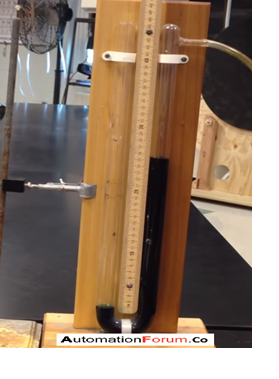 The pressure is the ratio of force to the area over which that force is distributed, it is the force per unit area applied in a direction perpendicular to the surface of an object. An action of one force against another force can be called as pressure, the pressure is force applied to or distributed over a surface.

Why do we measure Pressure

The measurement and control of fluid pressure is important in process industries a pressure sensor measures pressure, typically of gases or liquids. Pressure sensor acts as a transducer it generates a signal as a function of the pressure imposed and the signal will be electrical. Pressure sensors can be used to indirectly measure other variables such as fluid/gas flow, speed, water level, and altitude.

What are the types of Pressure

It is the pressure that an area experiences due to the force exerted by the atmosphere.

What are the types of pressure measurement

A manometer is based on liquid column method it can be used to measure the pressure of the fluids and this device is based on the principle of balancing the column of liquid by the same or other columns of liquid they are of two types simple and differential manometer. Simple manometers are those which measure pressure at a point in a fluid containing in the pipe or a vessel, differential manometer measures the difference of pressure between any two points in a fluid contained in a pipe or vessel. Properties of manometers are they have high chemical stability, low viscosity, low capillary constant, low volatility, and low vapor pressure.

Diaphragm elements can be classified into two types first one is those which utilize the elastic characteristics of the diaphragm and the second one is those that are opposed by spring or other separate elastic elements. The first one consists of one or more capsules each composed of two diaphragms bonded together by soldering, brazing, or welding, commonly used metal in diaphragm elements are brass, phosphor bronze, and stainless steel. The second type of diaphragm is used for containing the pressure and exerting a force on the opposing elastic elements and the diaphragm will be flexible. Movement of the diaphragm is opposed by a spring that determines the deflection for a given pressure.

Advantages and applications of diaphragm type

It is used for the measurement of extremely low pressure, vacuum or differential pressure. They are commonly used in very corrosive environments. Their advantages are it is very sensitive and they can measure fractional pressure differences over a very minute range and they only needs less space.

The idea behind the device is that cross-sectional tubing when deformed in any way will regain its circular form under the action of pressure. The tube is generally bent into C shape or arc length of about 27 degrees. Bourdon tubes can be used for very high range of differential pressure measurement. Bourdon gauges can also be constructed in the form of a helix or spiral for better linearity and large sensitivity bourdon tube material must have good elastic or spring characteristics

Bellows are used to measuring pressure and they can be made of cascade capsules. It is basically manufactured by fastening together many individual diaphragms. The bellows element is a one-piece expansible, collapsible and axially flexible member. It can be manufactured from a single piece of thin metal. The commonly used bellow elements are by rolling a tube, by hydraulically forming a drawn tubing, by turning from a solid stock of metal. Liquid filled bellows can function in a number of transducer applications

This is a passive type of resistance pressure transducer and its electrical resistance will change when it is stretched or compressed. A strain gauge is a wire which will change its resistance when mechanically strained, due to physical effects. Strain gauge is connected to the diaphragm and when the diaphragm flexes due to the applied pressure, the strain gauge will stretch or compress and because of this variation in its cross-sectional areas and its resistance will change due to this and this change is converted into voltage by linking two or four similar gauges similar to Wheatstone bridge so that the output can be maximized and reduces sensitivity to errors.

Piezoelectricity is the ability of some materials mostly crystals to generate an electric potential in response to applied mechanical stress. In this transducer, the piezoelectric effect is used in certain materials such as quartz to generate rapid electrical signals and measuring the strain upon the sensing mechanism due to pressure. Common types of piezoelectric pressure transducers are charge mode type and low impedance voltage-mode type

Advantages of a piezoelectric pressure transducer

Disadvantages of a piezoelectric pressure transducer

What is OSI (Open Systems Interconnection)?