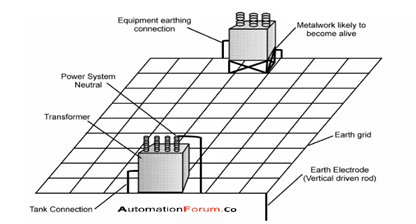 Earthing can be described as transmitting the immediate discharge of electricity with the help of low resistive wires to the ground. It is a connection to the general mass of the earth by the earth electrode. In this process the metallic bodies of all electrical apparatus will be connected to the earth by a wire which has low resistivity, the neutral point of the supply system or the non-current carrying part of the electrical apparatus will be connected to earth and its advantage is that if an immediate discharge of electrical energy takes place there won’t be any danger. A device is said to be earthed if it is electrically connected to an earth electrode.

What is a solidly earthed system

A device or a system can be said to be solidly earthed if it is electrically connected to an earth electrode without the intention of additional resistance or impedance in earth connection, and this system can protect the device from over-voltages.

What are the objectives of earthing

Why do we need earthing

Earthing is done for the safety of humans, equipment, property and if there is no effective earthing then it could lead to the loss of property and lives.

What is the difference between system earthing and equipment earthing

Why coal and salt is added in earth pits

When these are combined together it forms a type of system, the first letter shows how the supply source is earthed and the second one denotes how metalwork of installation is earthed and the third and fourth denotes the function of neutral and protective conductors

This system has a direct connection to the supply source to the earth and a direct connection of the installation metalwork to earth. An example of this is overhead power lines with earth electrodes and the mass of earth as a return path. TT system needs RCD protection

What are the advantages of a TT system

The TN-CS system is almost the same as the TN-S but the supply cable sheath is also the neutral, the supply neutral conductor of a distribution main connected with the earth at source and at intervals along its run. In this system, the distributor’s neutral conductor is also used to return the earth fault currents arising in the consumer’s installation safely to the source. To do this consumer’s earthing terminal will be linked to the incoming neutral conductor. It forms a combined neutral and earth conductor known as ‘protective earthed neutral’ and the earth and neutral are separate conductors and this system is known as protective multiple earthing.

What is an IT earthing arrangement

In this network, the distribution system has no connection to earth or it has only a high impedance connection. if a single insulation fault occurs it can cause the way for the flow of excessive currents through the personnel, because there is no low impedance circuit for the flow of fault current

What is HVAC system?