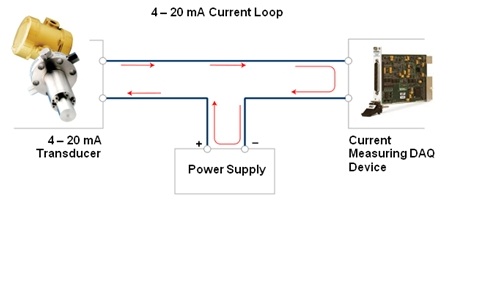 In four-wire transmitters, two wires are used to power the instrument, and the other two wires are used for signal transmission. They are used in special cases, such as in remote areas where commercial power is not available. In these cases, the transmitter will be powered by an alternative power source, such as a battery or even a solar cell.
For most applications where commercial power is available, the two-wire transmitter is the practical instrument, due to the additional cost of installing and running four cables to one transmitter as compared to two cables.

The two-wire transmitters are designed to provide a current transmission signal of 4 to 20 mA dc. Most of the electronic pressure transmitters available today are two-wire devices. A two-wire transmitter uses part of the 4 mA bias current to operate its electrical circuit. Both the power and the signal are transmitted by the same two cables. The current transmission is used because a current signal can be transported over long distances without being affected by the resistance of the circuit that can change according to length and temperature, as well as the quality and number of connections.

Intelligent or “smart” transmitters transmit digital and analog signals by the same two cables. A digital signal is superimposed on the traditional 4 to 20 mA signal.
Digital signal transmission is faster and more accurate than analog. More information can be transported between the instrument and the control room using the same two cables with bidirectional digital transmission, including configuration and diagnostic information.
Bidirectional communications mean that a value can not only be read from the final device, but can also be written to the device. For example, the calibration constants associated with a particular sensor can now be stored directly in the device and changed as necessary. This often makes it possible to remotely diagnose a field device problem, thus saving a costly trip to the field. The most widespread digital communication is HART® based on Bell 202 FSK standard, there are millions of instruments in the world using this standard, it is simple and well understood.

Fieldbus is a digital, two-way, multi-drop communication link among intelligent control devices that can be used only instead of the 4-20 mA standard.
Multi-drop communication means that digital communication between several field devices (such as valves, pressure transducers, etc.) and computers, programmable logic controllers (PLC) or remote terminal units (RTU) can take place over the same two cables. . The multiple drop capacity of a field bus may result in the most immediate cost savings benefit for users, since a single pair of cables is shared across multiple devices. While with analog or smart devices, a separate cable is needed between each final device and the control system.
Currently, the main disadvantage for the user, however, is that there is a more accepted fieldbus standard, among which Profibus and Fieldbus Foundation (FF) are probably the most widespread. The main advantage of FF is that it allows the relocation of control functions (such as the PID) from the central control room to the fieldbus devices. In this way, a cycle can be performed through direct communication between a sensor and a control valve. This results in better and more reliable control, as well as a less complex centralized control system. The current limitation is the communication speed and the limited maximum number of instruments linked to the same communication “segment”.

The main advantage of Profibus is that it is well suited also for digital signal transmission. Therefore it is often selected in processes with a high number of digital signals (like batch processes or manufacturing industries). It can reach higher communication speed in the traditional master slave configuration, where a controller acquired data from the transmitter and sets the values of the valve. In case of failure of the main master a reserve master can take over the communication

What is Mass spectrometry ?