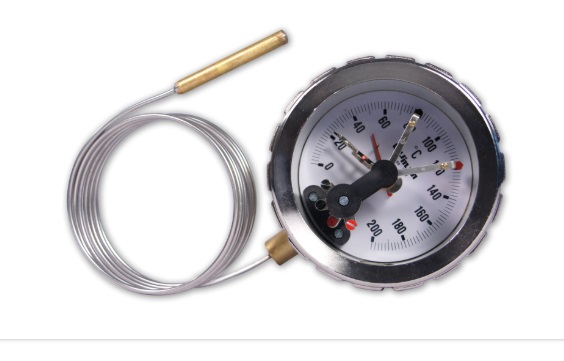 The construction and mechanical operation of all types of pressure spring thermometers are identical. The thermal system of pressure spring thermometer contains a metal bulb, capillary and receiving element. Metal bulb contains a thermometer fluid, a liquid or a gas or a liquid vapour and is inserted at the point at which the temperature is to be measured. The bulb comes in thermal equilibrium with its surroundings, thereby developing a given pressure or displacement of fluid. A metal capillary is connected to the bulb and transmit the pressure at the bulb to the receiving element at the instrument. The receiving element is a form of bourdon tube or pressure spring. It is used to convert the pressure of displacement of fluid in the thermometer bulb into a motion. This motion is used to operate a pointer for the indication of temperature.

Mercury is most widely used thermal liquid because of its wide temperature range. Ethanol or Toluene may also be used. The thermal expansion of these liquid is about six times greater than that of mercury and from that standpoint their use is advantageous. The temperature limits of the mercury filled pressure thermometer are about -35 to 10000F.

It is based on the ideal gas equation: PV = RT, for one mole of an ideal gas; where P, V and T are the pressure, volume and temperature of the gas, respectively and R is the universal gas constant.

Since it operates at constant volume, the equation can be written as:  T or P1/T1 = P2/T2µP

A simple form of constant-volume gas thermometer is shown in Figure .

The gas is enclosed in the bulb B and the pressure recorded by the difference in levels (h) of the mercury columns. The mercury level at R is always adjusted so that it coincides with the mark. The pressure of the gas within the bulb is then given by P2 = P1 + h, where P1 is the atmospheric pressure. By using different gas thermometers a wide range of temperatures can be measured:

Since the vapour pressure depends solely on the temperature at the free surface of the liquid, the vapour actuated thermometer indicates only the temperatures existing at the free surface. The most commonly used fluids for vapour actuated thermometer include methyl chloride, sulphur dioxide, ether, toluene, propane, butane and hexane. Its range depends entirely on the filling medium. However, temperatures as low as -500F and as high as 6000F may be measured.

What are piezoelectric actuators?