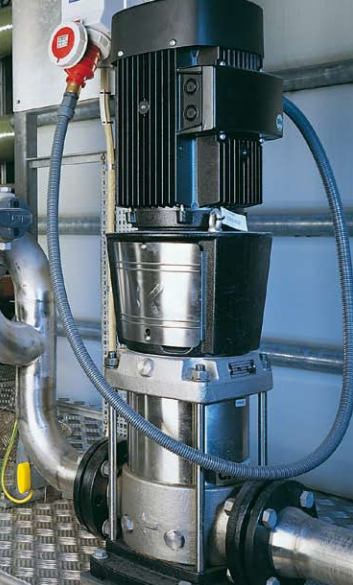 Today, various methods for Starting methods of motor are available. Changes, such as higher starting currents for new energy-efficient motor designs, mean greater focus on starting methods. This is closely linked to the fact that power quality has become a much more important issue in recent years, which has in turn led to greater emphasis on voltage transients associated with the start-up of large motors. This section will outline the various Starting methods of motor used today and provide brief descriptions of their advantages and drawbacks

As the name suggests, direct-on-line starting means that the motor is started by connecting it directly to the supply at rated voltage. Direct-online starting, (DOL), is suitable for stable supplies and mechanically stiff and well dimensioned shaft systems – and pumps qualify as examples of such systems.

DOL starting is the simplest, cheapest and most common starting method. Furthermore it actually gives the lowest temperature rise within the motor during start up of all the starting methods. It is the obvious choice wherever the
supply authority’s current limiting restrictions  allow for its use. Power plants may have varying rules and regulations in different countries; for example, three-phase motors with locked-rotor currents above 60 A must not use direct-on-line starting in Denmark. In such cases, it will obviously be necessary to select another starting method. Motors that start and stop frequently often have some kind of control system, which consist of a contactor and overload protection such as a thermal relay.

Normally, low-voltage motors over 3 kW will be dimensioned to run at either 400 V in delta (∆) connection or at 690 V in star (Y) connection. The flexibility provided by this design can also be used to start the motor with a lower voltage. Star-delta connections give a low starting current of only about one third of that found with direct-on-line
starting. Star-delta starters are particularly suited for high inertias, where the load are initiated after full load speed.

But they also reduce the starting torque to about 33%. The motor is started in Y-connection and accelerated and switched to the star-delta connection. This method can only be used with induction motors that are delta connected to the supply voltage. If the changeover from star to delta takes place at too low a speed, this can cause a current
surge which rises almost as high as the corresponding DOL value.

The auto-transformer contains transformers, often featuring two voltage reductions, which reduce voltage to provide low-voltage starting by tapping off the secondary voltage of the auto-transformer, usually at approximately 50 – 80 per cent of full voltage. Only one tapping is used, depending on the starting torque/current required. Of course, reduced voltage to the motor will result in reduced locked-rotor current and torque, but this method gives the highest possible motor torque per line ampere. At no point in time is the motor not energised, so it will not loose speed as is the case with star delta starting. The time of the switch between reduced and full voltage can be adjusted to suit specific requirements.

Besides a reduced locked rotor torque, the autotransformer starting method has yet another disadvantage. Once the motor has started running, it is switched over to the mains voltage – this will cause a current pulse

A soft starter is, as you would expect, a device which ensures a soft start of a motor.

Soft starters are based on semiconductors. Via a power circuit and a control circuit, these semiconductors reduce the initial motor voltage. This results in lower motor torque. During the starting process, the soft starter gradually increases the motor voltage, thereby allowing the motor to accelerate the load to rated speed without causing high torque or current peaks. Soft starters can also be used to control how processes are stopped. Soft starters are less expensive than frequency converters.

They do, however, share the same problem as frequency converters: they may inject harmonic currents into the system, and this can disrupt other processes. The starting method also supplies a reduced voltage to the motor during start-up. The soft starter starts up the motor at reduced voltage, and the voltage is then ramped up to its full
value. The voltage is reduced in the soft starter via phase angle. In connection with this starting method current pulses will not occur. Run-up time and locked-rotor current (starting current) can be set.

Frequency converters are designed for continuous feeding of motors, but they can also be used for start-up only.

The frequency converter makes it possible to use low starting current because the motor can produce rated torque at rated current from zero to full speed. Frequency converters are becoming cheaper all the time. As a result, they are increasingly being used in applications where soft starters would previously have been used.

Even so, frequency converters are still more expensive than soft starters in most cases; and like soft starters, they also inject harmonic currents into the network.