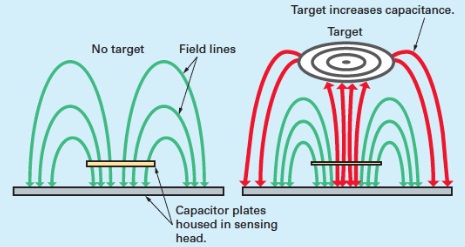 There are two basic ways to detect object presence; contact and proximity. Contact implies that there is mechanical contact and a resulting force between the sensor and the object. Proximity indicates that the object is near, but contact is not required.In this session we are gonna discuss about  Proximity detection using capacitance & inductive sensors

Capacitive sensors are able to detect most materials at distances up to a few centimeters. Recall the basic relationship for capacitance.

In the sensor the area of the plates and distance between them is fixed. But, the dielectric constant of the space around them will vary as different materials are brought near the sensor. An illustration of a capacitive sensor is shown in Figure below. an oscillating field is used to determine the capacitance of the plates. When this changes beyond a selected sensitivity the sensor output is activated.

For this sensor the proximity of any material near the electrodes will increase the capacitance. This will vary the magnitude of the oscillating signal and the detector will decide when this is great enough to determine proximity.

The sensors can detect objects a few centimeters away from the end. But, the direction to the object can be arbitrary as shown in Figure below. The magnetic field of the unshielded sensor covers a larger volume around the head of the coil. By adding a shield (a metal jacket around the sides of the coil) the magnetic field becomes smaller, but also more directed. Shields will often be available for inductive sensors to improve their directionality and accuracy.

What are pneumatic controllers ?

What are the Emergency shutdown procedures?