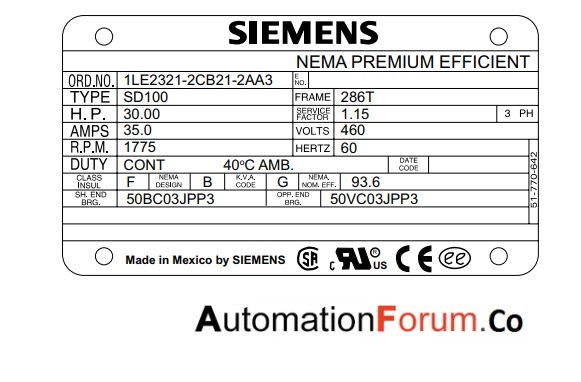 Nameplate The nameplate of a motor provides important information necessary for proper application or we call Motor Specifications . For example,The following illustration shows the nameplate of a 30 horsepower (H.P.) three-phase (3 PH) AC motor.

AC motors are designed to operate at standard voltages. This motor is designed to be powered by a three-phase 460 V supply. Its rated full-load current is 35.0 amps.

Base Speed (R.P.M.) and Frequency (HERTZ)

Base speed is the speed, given in RPM, at which the motor develops rated horsepower at rated voltage and frequency. Base speed is an indication of how fast the output shaft will turn the connected equipment when fully loaded.This motor has a base speed of 1775 RPM at a rated frequency of 60 Hz. Because the synchronous speed of a 4-pole motor operated at 60 Hz is 1800 RPM, the full-load slip in this case is 1.4%. If the motor is operated at less than full load, the output speed will be slightly greater than the base speed.

The motor in this example has insulation class F and a service factor of 1.15.This means that its winding temperature is allowed to rise to 155° C with an additional 10° C hot spot allowance.

NEMA also uses letters (A, B, C, and D) to identify motor designs based on torque characteristics.The motor in this
example is a design B motor, the most common type. Motor design A is the least common type.

AC motors that meet even higher efficiency standards than those required by EPAct. More recently, the Energy Security and Independence Act of 2007 (EISA) was passed. EISA requires that most engines manufactured after December 19, 2010 comply with NEMA’s premium efficiency levels. This includes engines previously covered by EPAct and some additional categories of engines.

How does the Avalanche Diode works?