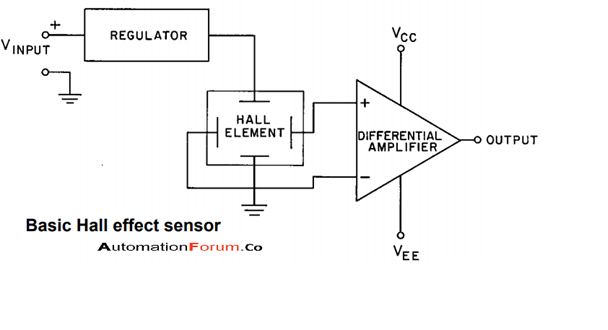 Hall-effect is the effect of generating a magnetic voltage by using a magnetic field, this will occur in a current-carrying conductor when it is placed in a magnetic field perpendicular to the current. It’s most common application is a hall effect transducer which is used to measure the magnetic field and converts that measurement into voltage

The function of a hall sensor is based on the principle of hall-effect. It is a transducer which is used to measure the magnetic field according to the magnetic field it varies the output voltage. Current can be measured by a hall sensor without interrupting the circuit. To ensure linearity high field strength magnets are required which produce a large change in field strength for the required movement. Voltage is generated transversely to the direction of current flow in an electric conductor if a magnetic field is applied perpendicularly to the conductor. Magnetic flux density can be measured by holding the current constant

The hall plate – hall plate has current terminals and taps for the hall voltage, these are arranged on the surface of a semi-conductive platelet. If a magnetic field is applied to it then it will respond by an output voltage which is proportional to the magnetic field strength and the output voltage is very small and requires additional electronics to achieve useful voltage levels. The hall-effect sensor is formed when the hall plate is combined with the associated electronics, Hall plate area should be small to accurately measure the magnetic field density, it should be smaller than the cross-section of the field being measured.

Hall element – it is the basic magnetic field sensor

Regulator – it holds the current value so that the output of the sensor only reflects the intensity of the magnetic field.

Why use the hall-effect sensors

A simplified switch is an important feature hall-effect IC switches have hall voltage generators, signal amplifiers, Schmitt trigger circuits, and transistor output circuits all on a sing IC chip. The output is clean, fast, and switched without bounce. These sensors are efficient, effective and of low cost. Hall-effect sensors are virtually immune to environmental contaminants and it is suitable to use under severe service conditions.

This sensor is used to determine the current levels and it utilizes the principle of hall-effect. The sensors will monitor the gauss level which is created by the current flow, they do not measure the actual current flow.

The current which is to be measured is passed through a flux collecting core that concentrates the magnetic field on the hall element, the hall element is a piece of semiconductor material, which produce the hall voltage proportional to the current flow. The output of the Hall element is regulated by a low noise high gain amplifier

These sensors can be used to detect the motion or change in field strength of an electromagnet. Energy consumption is very low, the output is linear and the temperature is stable. This sensor generates an analog output voltage which is proportional to the magnetic flux perpendicular through the hall plate.

Hall switches is a switching sensor which has an integrated comparator with predefined switching points and digital output which can be adapted to different logic systems such as latched, unipolar, bipolar. All hall switches have an open-drain output transistor and need an external pull up resistor to the supply voltage, a standard hall switch has a single hall plate and can respond to the absolute value of the magnetic field perpendicular to the plate. Hall switch is characterized by the magnetic switching points. If the magnetic flux exceeds the output transistor is switched on, and if it drops the transistor is switched off.

Applications of the hall-effect sensor

Automotive applications of the hall-effect sensor

Industrial applications of the hall-effect sensor

What is Hybrid level measurement system?

Meters used in the MCC panel.

what are the Series and parallel circuit? which one is better parallel or series circuit