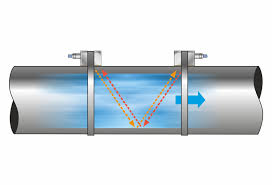 Doppler flow meters are based on the Doppler principle. The transmitter of a Doppler flow meter projects an ultrasonic beam at a frequency of about 0.5 MHz into the flowing current and diverts the reflected frequency.

If the reflectors travel at the speed of the fluid, the frequency of the reflected wave travels according to the Doppler principle, in proportion to the velocity of the flow. Combining Snell’s law and the Doppler equation, the flow velocity can be determined as follows if V << C.

where Δf = Difference between transmitted and received frequency.
fo = frequency of transmission
Ɵ= angle of the transmitter and receiver crystal with respect to the pipe axis
Ct = Velocity of sound in the transducer

B the transmitter and the crystals of the receiver are contained in a single set of transducer that will be mounted in the pipe. The alignment of the glass is controlled by the manufacturer.

The transmitter glass and receiver glass are mounted separately on opposite sides of the pipe exterior. The alignment is maintained by a mounting assembly that maintains the relative positions of the transducers as shown

When the process stream contains a large amount of solids and the velocity of the solid particles near the wall is probably lower than the average in a single transducer installation (which causes large errors), it is recommended to use the two transducer approach . With this approach, the reflected ultrasonic radiation is received from parts of the flow stream.

What are fixed resistors? Types of Fixed value Resistors