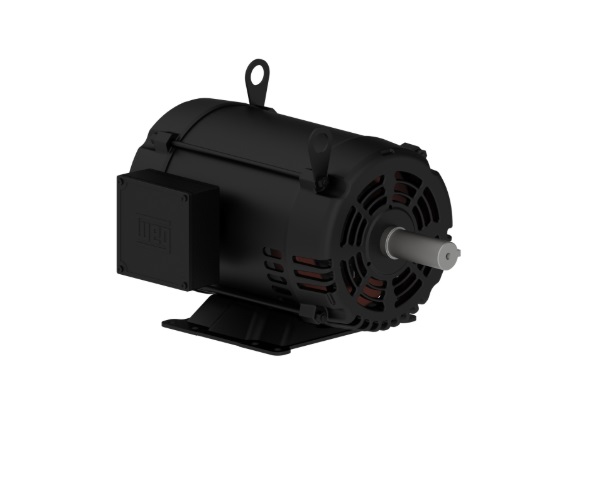 A motor enclosure not only holds the motors components together, it also protects the internal components from
moisture and contaminants. The degree of protection depends on the enclosure type. In addition, the type of enclosure affects the motor’s cooling.There are two categories of enclosures: open and totally enclosed.

Open enclosures permit cooling air to flow through the motor. One type of open enclosure is the open drip proof (ODP) enclosure.This enclosure has vents that allow for air flow. Fan blades attached to the rotor move air through the motor when the rotor is turning.The vents are positioned so that liquids and solids falling from above at angles up to 15° from vertical cannot enter the interior of the motor when the motor is mounted on a horizontal surface. When the motor is mounted on a vertical surface, such as a wall or panel, a special cover may be needed. ODP enclosures should be used in environments free from contaminates.

In some applications, the air surrounding the motor contains corrosive or harmful elements which can damage the internal parts of a motor. A totally enclosed non-ventilated (TENV) motor enclosure limits the flow of air into the motor, but is not airtight. However, a seal at the point where the shaft passes through the housing prevents water, dust, and other foreign matter from entering the motor along the shaft. Most TENV motors are fractional horsepower. However, integral horsepower TENV motors are used for special applications. The absence of ventilating openings means that all the heat from inside the motor must dissipate through the enclosure by conduction.These larger horse power TENV motors have an enclosure that is heavily ribbed to help dissipate heat more quickly.TENV motors can be used indoors or outdoors.

A totally enclosed fan-cooled (TEFC) motor is similar to a TENV motor, but has an external fan mounted opposite the
drive end of the motor.The fan blows air over the motor’s exterior for additional cooling.The fan is covered by a shroud to prevent anyone from touching it.TEFC motors can be used in dirty, moist, or mildly corrosive environments.

Hazardous duty applications are commonly found in chemical processing, mining, foundry, pulp and paper,
waste management, and petrochemical industries. In these applications, motors have to comply with the strictest
safety standards for the protection of life, machines and the environment. This often requires use of explosion proof (XP) motors.

An XP motor is similar in appearance to aTEFC motor, however, most XP enclosures are cast iron. In the United States, the application of motors in hazardous locations is subject to National Electrical Code® and standards set by Underwriters Laboratories and various regulatory agencies

Why is motor protection necessary?