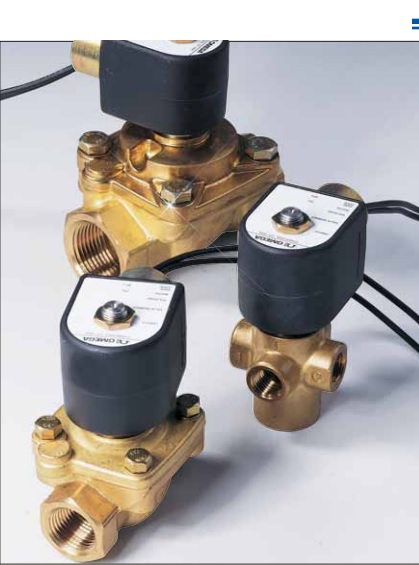 Wrapped enamelled copper coil which concentrates the effect of the magnetic field produced when current passes
through a conductor. Available to employ alternating (AC) or direct current (DC). DC coils are quieter, show less wear
on the plunger or core tube and demonstrate a high holding force whereas an AC coil, although it displays faster switching times, can hum, requiring a shading ring and facing a risk of burn-out if the plunger is ever jammed.

A precision mass which reacts to the influence of the magnetic field created by the coil when current is added. The
plunger is held by the coil for as long as current flows. When the flow of electric current is halted the spring forces
the plunger back to its rest position. Stringent magnetization properties, low magnetic memory effect, high wear resistance as well as high chemical resistance are required.

The spring usually works against the coil to revert the valve
back to its normal position when the valve sees no power.

A wide range of global electrical connections are available. Many solenoid systems are designed for IP65 protection.

Accurate tube in which the plunger moves.

6.Shading ring (Required on AC Only)

An electrically conductive ring located in the stopper to prevent constant oscillation based on the mains frequency.
Without this addition noise would result from the interaction of the spring force and the magnetic force when, twice
per cycle, the voltage drops to zero and the spring wins the contest.

Stringent requirements in regards to evenness, flatness and peak-to-valley height are made on the pole faces of the
stopper and plunger to achieve a hum-free holding force which is as high as possible. A large air gap between the
poles substantially reduces the holding force since the magnetic conductivity of air is substantially less than that of iron.

Either polyamide or epoxy coating is molded around the coil to protect it from damage. The material determines the
working rate of the coil. The encapsulation material and the coil surface area predict good heat dissipation and radiation from the surface. The chemically resistive encapsulation protects the electrical system against harmful influences such as dust, dirt and moisture.

Usually measured by diameter in mm this determines the area on which the media pressure will act and the gap
through which the media will flow when the valve is energized.

Many fluidic sizes and connections are available to meet local geographic or industry specific standards.

A seal is the soft material, connected permanently to the plunger, which halts the flow of fluid from one side of the
orifice to the other when sitting on the seat which is a raised area on the orifice which concentrates the pressure
of the seal

The direct acting plunger solenoid valve is the most common and utilizes a rugged, proven working principle.
When no electrical power is applied to coil the core spring, assisted by the fluid pressure, forces the plunger and the attached seal onto the valve seat and the path from the inlet to the outlet is blocked. When power is applied the solenoid coil generates enough magnetic force to pull the plunger and seal upwards against the spring and fluid pressure, the path from inlet to outlet is opened and flow begins.

These valves have three ports and two seats. One valve seat is always open while the other is closed. These valves can be used to mix and distribute, and are often used with compressed air to pilot larger pneumatically driven valves.
A normally closed 3/2-way valve does not allow flow from the pressure port (P) to the A port when no voltage is applied but the A port is directly connected to the R port. In this de-energized state, a strong conical spring, acting against the media pressure from under the seat, forces the plunger onto the seat. When the coil is energized, the plunger is pulled upwards and allows flow between the P port and A and simultaneously closes the A to R channel.

Pivoted armature valves offer excellent reliability, ease of use and long service life. The valve is switched by the coil inducing a lateral/rotational movement of the core around a pivot in the base. The armature thus can seal against one of two horizontally arranged seats in the body cavity. In contrast to plunger style valves the pivoted armature allows the use of a media separating diaphragm which means these valves can be used for the control of corrosive, contaminated or aggressive fluids and vacuum. They are easily manifold mounted and are available in both 2/2-way and 3/2-way version. Unlike the plunger valves, the 3/2-way version has all 3 ports in the same plane.

Rocker armatures demonstrate extremely high cycle life and are constructed both with and without an isolating diaphragm. In each case energy applied to the coil moves a horizontal, low mass rocker moves around a fulcrum
between the seats with very little frictional consequences, sealing against one of two vertically oriented seats. This operational concept works well for both 2/2-way and 3/2-way versions and the system also provides a reasonable amount of resistance to back-pressure. All ports are accommodated in the same plane in the valve body or in-line on a manifold. Without the diaphragm the valves are used for the control of neutral gases and liquids and are
frequently employed as a pilot for pneumatic valves in both hazardous and non-hazardous areas. When a diaphragm is integrated into the design, to separate the mechanics of the valve from the fluid path, the valve can be used for agressive fluids and as such they are employed either as stand alone valves or as isolated pilots for larger servo assisted valves

The flipper armature moves a high tech fully encapsulated flexible sealing system between two opposing seats.
Flipper valves demonstrate extremely high cycle life and are always constructed with an isolating diaphragm. The vertical armature has a permanent magnet, and a low mass flipper moves around a fulcrum below both seats with very little frictional consequences. This operational concept works well for both 2/2-way and 3/2-way versions and in both cases the ports are accommodated in the same plane in the valve body or in-line on a manifold.
The valves are often used for the repeatable control of neutral gases and liquids and are frequently employed as a pilot for pneumatic valves in both hazardous and non-hazardous areas.

what are ball valves?

Difference between Modbus & Modbus Plus

What is Thermocouple Gauge ?