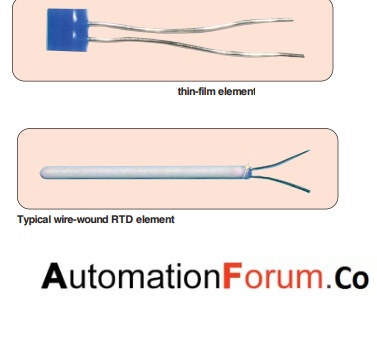 An RTD is a device which contains an electrical resistance source (referred to as a “sensing element” or “bulb”) which changes resistance value depending on it’s temperature. This change of resistance with temperature can be measured and used to determine the temperature of a process or of a material. .In this session we are going to discuss about  Difference between wire wound & film RTD’s

It is manufactured by placing a coil of thin wire (7 microns to 35 microns) into a ceramic insulator. The resistance of the coil is suitably adjusted to the ohms corresponding to that particular temperature. Ideally, this coil should be freely suspended for natural expansion and contraction. However, such construction is not immune to vibration and hence it is not adopted for industrial application. For industrial application, normally partially supported or fully supported construction is used which are quite immune to vibration. The extended leads are quite rugged as compared to the alpha wire and normally made from Pt base metal (for Platinum resistors). The choice of ceramic insulator is also very important as any impurities in the insulator may detoriate the characteristic of the alpha wire

Wire wound elements contain a length of very small diameter wire (typically .0005 to .0015 inch diameter) which is either wound into a coil and packaged inside a ceramic mandrel, or wound around the outside of a ceramic housing and coated with an insulating material.
Larger lead wires (typically .008 to .015 inch diameter) are provided which allow the larger extension wires to be connected to the very small element wire.

In the newest construction technique, a platinum or metal-glass slurry film is deposited or screened onto a small flat ceramic substrate, etched with a laser-trimming system, and sealed.The film RTD offers substantial reduction in assembly time and has the further advantage of increased resistance for a given size.Due to the manufacturing technology, the device size itself is small, which means it can respond quickly to step changes in temperature.Film RTD’s are presently less stable than their hand-made counterparts, but they are becoming more popular because of their decided advantages in size and production cost.These advantages should provide the impetus for future research needed to improve stability.

To know more about Temperature measurement click the link below

WHAT IS RESISTANCE THERMOMETERS ?

What is optical pyrometer?