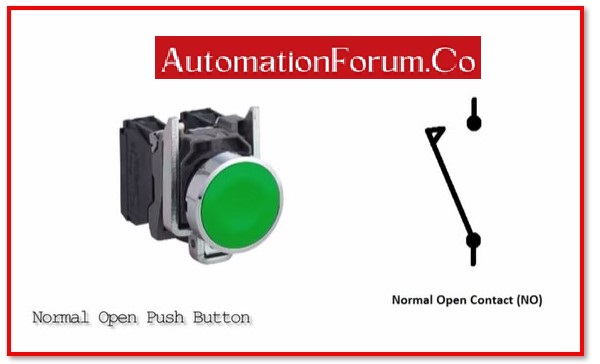 Logic is constructed based on the open or closed state of switches, sensors, or relays in every control circuit and automation system. Thus, understanding the NO/NC notion is essential. The phrases “normally open” (NO) and “normally closed” (NC) are used to describe the states that switches, sensors, or relay contacts are in when their coils are not stimulated. It is the core of process automation.

A NC contact, also known as a normally closed contact, functions exactly the same way as a NO contact. It stays closed until a specific requirement is accomplished. In this instance, an example of limit switch action. When a limit switch’s actuator is pressed, its NC contact, which is employed in a circuit, interrupts the circuit or current flow. Similar to this, a relay’s contacts are always closed unless its coil is energised.

What use do the NO and NC two contacts on a push button switch serve?

When you depress the NC contact, the circuit is connected.

A maintenance relay will often be present in this circuit to maintain the circuit’s connection. In this manner, the loop is kept electrified through the maintenance relay when the push button switch is released, enabling the system to function normally. prior to the arrival of the termination signal, such as the close button or emergency stop.

Push button switches often include two contacts of NO and NC because some applications require the use of NO contacts while others require the use of NC contacts. For example, the start button requires the use of NO contacts while the stop button requires the use of NC contacts (constitute one NO contact, one NC contact). The switch differs from the lighting panel switch in that the contact returns to its initial condition as soon as the button is released. There is no defence mechanism. Circuit breakers with load and short circuit protection are used in the lighting panel switch. It will stay closed till it pulls it open if there is no malfunction.

How to determine whether a Contact Is Normally Open or Closed?

The easiest way to recognise contacts is by their marking with the letters NO or NC, which are used on most switches and buttons. On the side of the component, manufacturers will occasionally place a little graphic showing the contact layout. This information is shown on a large number of contacts that are used for switches.

If the contacts are not marked, then should test them using a testing tool, such as a multimeter. In the absence of electricity and without being activated, a usually open contact will be open. When there is no power supply connected to a contact, it will be closed normally.

NO and NC contacts are distinguished by the terminal:

The switch’s “normal” setting is when it is not being operated.

NO and NC connections can be distinguished by terminal colour:

The colour of the terminal can be used to identify some push button switches. To prevent operational errors, do this the button caps are typically constructed of various colours. Red (or pink) indicates NC contact whereas green (or blue) indicates NO contact.

Measure the NO and NC Connections:

What is Profibus and what is its application in Instrumentation?

WHAT IS ELECTROMAGNETIC RELAY & EXPLAIN ITS FUNCTION